Flies, Snakes and Other WA Surprises!

Oh my goodness, the things that WA welcomes us with!

After having a cool breeze coming in off the ocean for a couple of days, the wind changed and became a very warm current from the opposite direction – bringing with it what is apparently a once yearly event – a fly plague! 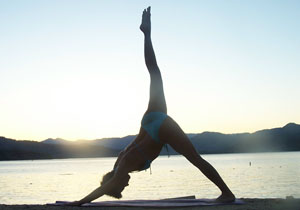 We started out early for our walk to the beach for morning Yoga, and it was difficult to walk though the swarms of young flies that were buzzing about our heads.  There were thick blankets of them on the ground and we all laughed about doing the “yoga wave” as we swatted flies while trying to do our Asana’s.

Later in the day we spotted a very fat blue tongue lizard who looked like he couldn’t move because his belly was so full!

Luckily most of our day was spent indoors doing lectures and activities, but later that afternoon we went to swim in the pool and were shocked to see the whole of the water covered with these little flies.  I almost wept in despair that the retreat was going to be ruined because we couldn’t even use the resort facilities!

But, as quickly as they arrived, the flies were gone and the next day there wasn’t even one in sight – but the warmer weather did bring out the snakes!  By 11am we’d seen three big python’s and one had set up camp outside Trudy’s room!  Not the sort of welcoming committee we’d expected!

Oh well, we certainly were getting back to nature at our “raw retreat”