Patrick Swayze – Are You Kidding?

“A much healthier-looking Patrick Swayze has stepped out in Los Angeles in a cowboy hat and dark sunglasses.

New photos of Swayze, who is suffering from pancreatic cancer, show the actor has come a long way in the three months since he was last snapped looking gaunt and frail.

The 56-year-old Dirty Dancing star was even well enough to puff on a cigarette as he made his way to a fast food restaurant, British tabloids reported.

He looked to have gained weight but still had tubes — probably catheters for his chemotherapy — sticking out of his arms. 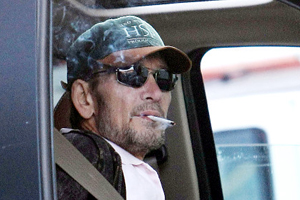 Swayze has been undergoing several aggressive treatments including an advanced form of radiotherapy known as the CyberKnife technique.

Under this treatment, Swayze has been zapped with hundreds of beams of radiation targeting inoperable tumours.

Swayze was diagnosed with pancreatic cancer early last year and has since been the subject of several reports claiming he was near death.”

How does the saying go “You can’t help those who won’t help themselves?”

Just in case you missed it in the above story, Patrick Swayze was “puffing on a cigarette as he made his way to a fast food restaurant“.  Yep that’s the best thing you can do for yourself when you’re dying of cancer…. NOT!

What does it take for people to change their habits if a life-threatening illness doesn’t do it?  I know fast food and cigarettes may not have caused the cancer (although they could have), but they’re definitely not the cure.  With all the health information available today with a few clicks on Google, no-one has the excuse of ignorance when it comes to looking after their health anymore.

That’s OK, Big Pharma have likely promised a magic bullet and told him that food, herbs and supplements are irrelevant when it comes to treating cancer. They probably said the same thing to Michael Jackson and Farrah Fawcett too….

You shouldn’t be so hard on Swayze. I think he’s going to be just fine. He’s looking better lately and I heard he even has a movie that he just started filming.