No, this isn’t an analysis of the mental status of the brilliant artist Van Gogh – but is the name of a new restaurant in the Philippines!

We all know that “food can improve your  mood”, but this restaurant takes it to another level

Filipinos can eat themselves happy at Van Gogh is Bipolar

“It’s no secret that satisfying a craving for chocolate can instantly improve a person’s mood. It’s lesser known that a huge range of natural foods can stimulate longer-lasting ‘happy’ hormones than chocolate ever could. Knowledge that could become more memorable thanks to Van Gogh is Bipolar, a restaurant and cafe that opened in Quezon City earlier this year. (The Dutch painter has been posthumously diagnosed with bipolar disorder by some psychiatrists, while others believe he suffered from schizophrenia.) 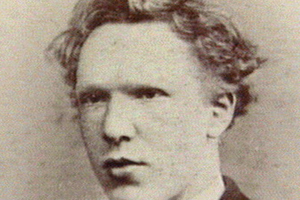 The cafe only serves all-natural ‘happy-hormone-producing’ foods, set to lift customers’ moods. Its menu is loaded with foods that are believed to help balance the brain’s levels of serotonin and dopamine, which in turn helps alleviate mild to moderate depression. While nutritional scientists have assumed this for a while, it’s the first time—as far as we know—that the theory has been used as the starting point for a restaurant.

Resembling a living room, Van Gogh is Bipolar’s interior is meant to make customers feel comfortable and at home. Dish names, meanwhile, are inspired by celebrities known to have suffered from mood disorders. There’s the Larry Flynt Cabbage Experience and Jim Carey Sardines—and even a series of Presidents’ Meals that includes concoctions for Roosevelt, Lincoln and Clinton. The menu is designed to show customers the key foods that maintain healthy hormone levels, helping them include these foods in their diet at home. Combining functional food with social entrepreneurship, the concept aims to make a real difference in a new way. An idea worth spreading!”

Next post: Ten Ways to Help Get Raw Food Into Reluctant People