Ninemsn.com: British actor and former 007 Roger Moore has paid for and starred in a poster campaign outside a top London shop, pressing it to stop selling foie gras.

The bus stop poster outside the upmarket department store Selfridges, on the British capital’s Oxford Street, urges shoppers to think twice about buying the delicacy, which Moore calls “tasteless”. 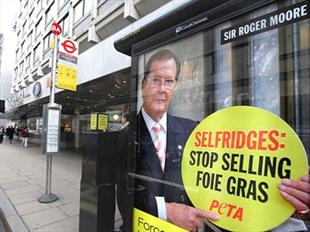 The ad, for campaign group People for the Ethical Treatment of Animals (Peta), is directly opposite Selfridge’s famous Food Hall, and proclaims: “Force-Feeding Birds Is Cruel, Not Yule”.

An earlier plan for a poster showing how foie gras is made was deemed as too offensive.

“As foie gras production is too violent to show on an ad, surely this ‘torture in a tin’ is too violently produced for Selfridges to sell,” said the 82-year-old former film super spy James Bond.

Last month Moore said he had written to the chairman of Selfridges, offering to buy its entire stock of the product, which is created by force-feeding ducks and geese to enlarge their livers.

A spokesman for Selfridges declined to comment on the new ad campaign.

Moore took over the Bond film duties from Sean Connery in 1973, making his debut in Live and Let Die before completing the sequence with A View to a Kill 12 years later.

In recent years he has become well known for his humanitarian work, most notably through his activities as a UNICEF Goodwill Ambassador, helping to raise funds for under-privileged children.