The Council of Europe member states will launch an inquiry in January 2010 on the influence of the pharmaceutical companies on the global swine flu campaign, focusing especially on extent of the pharma’s industry’s influence on WHO. The Health Committee of the EU Parliament has unanimously passed a resolution calling for the inquiry.

The step is a long-overdue move to public transparency of a “Golden Triangle” of drug corruption between WHO, the pharma industry and academic scientists that has permanently damaged the lives of millions and even caused death. The parliament motion was introduced by Dr. Wolfgang Wodarg, former SPD Member of the German Bundestag and now Chairman of the European Parliament Health Committee.

Wodarg is a medical doctor and epidemiologist, a specialist in lung disease and environmental medicine, who considers the current “pandemic” Swine Flu campaign of the WHO to be “one of the greatest medicine scandals of the Century.”[1]

The text of the resolution just passed by a sufficient number in the Council of Europe Parliament says among other things, “In order to promote their patented drugs and vaccines against flu, pharmaceutical companies influenced scientists and official agencies, responsible for public health standards to alarm governments worldwide and make them squander tight health resources for inefficient vaccine strategies and needlessly expose millions of healthy people to the risk of an unknown amount of side-effects of insufficiently tested vaccines.

The “bird-flu”-campaign (2005/06) combined with the “swine-flu”-campaign seem to have caused a great deal of damage not only to some vaccinated patients and to public health-budgets, but to the credibility and accountability of important international health-agencies.”[2] 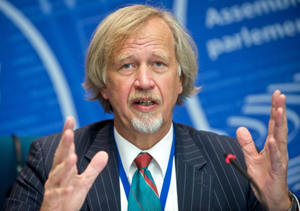 The Parliamentary inquiry will look into the issue of ,falsified pandemic” that was declared by WHO in June 2009 on the advice of its group of academic experts, SAGE, many of whose members have been documented to have intense financial ties to the same pharmaceutical giants such as GlaxoSmithKline, Roche, Novartis, who benefit from the production of drugs and untested H1N1 vaccines.

They will investigate the influence of the pharma industry in creation of a worldwide campaign against the so-called H5N1 “Avian Flu” and H1N1 Swine Flu. The inquiry will be given “urgent” priority in the general assembly of the parliament. In his official statement to the Committee, Wodarg criticized the influence of the pharma industry on scientists and officials of WHO, stating that it has led to the situation where “unnecessarily millions of healthy people are exposed to the risk of poorly tested vaccines,” and that, for a flu strain that is “vastly less harmful” than all previous flu epidemics.

Wodarg says the role of the WHO and its the pandemic emergency declaration in June needs to be the special focus of the European Parliamentary inquiry. For the first time, the WHO criteria for a pandemic was changed in April 2009 as the first Mexico cases were reported, to make not the actual risk of a disease but the number of cases of the disease basis to declare “Pandemic.” By classifying the swine flu as pandemic, nations were compelled to implement pandemic plans and also the purchase swine flu vaccines.

Because WHO is not subject to any parliamentary control, Wodarg argues it is necessary for governments to insist on accountability. The inquiry will also to look at the role of the two critical agencies in Germany issuing guidelines on the pandemic, the Paul-Ehrlich and the Robert-Koch Institute. Bravo!

F. William Engdahl is author of Full Spectrum Dominance: Totalitarian Democracy in the New World Order. He may be contacted through his website:  www.engdahl.oilgeopolitics.net