Hi everyone – wow it’s been a long time since I’ve updated my blog!

The last entry prior to the David Wolfe Tour posts – is about the Australia Day Retreat, and that was over two months ago – what happened??

Well, what happened was the whirlwind of the David Wolfe Australian Tour – which was such a huge undertaking (and amazing experience!) – that I had to put my own business on the back-burner for a little while. Apologies to everyone who keeps in touch via the blog and have e-mailed me wondering where I am!

The Tour was 14 sold-out events over three weeks in February, and not only did I spend several months prior to the tour organising all the details – I was on the tour itself, making sure that everything ran smoothly (which it did). 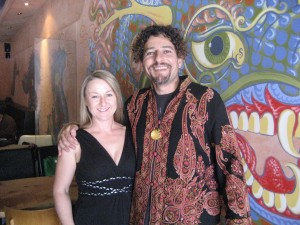 Next week I have one of my own Embracing Life! Six Day Detox, Healing and Raw Food Retreats at the Sunshine Coast of QLD which I am really looking forward to – it is the last one until September, so if you want to come along, there are still a couple of places left.

After that, you’ll be hearing from me a bit more often!  I have lots of new plans and developments coming up this year.  The membership club is being re-vamped and re-launched, there will be new e-mail news coming out regularly, more blogs on current issues, and even a book is in the pipeline!

I really like your motto “Healing is a journey, not just a raw food diet”

I have struggled with the food issue for some time. I make pretty good meal choices but the in between snacking is usually a result of keeping my “hands” busy.

Thanks for your feedback – I really like my motto too

It has a such a basis in my own experience. I belive food plays a big role in our health, but it’s not the only factor and I think a lot of people on the food / health bandwagon miss this point. Snacking isn’t always a bad thing – it depends what you snack on! I always have some healthy snacky foods available because I am a bit of a grazer as well