We don’t seem to have as many chemtrails here in Australia as there seem to be in America and Europe, but if anyone has read much about them, they always appear to be a bit of a mystery.

This letter appeared in Feb / March edition of Nexus Magazine, and it certainly gives some food for thought in this area.  The importance of the bee population in our whole ecological system cannot be underestimated. If what this letter says is true, then there is some very, very evil intent in the world and our awareness will be the first step in combating it.

“Dear Duncan: You ran an interesting article in 17/01 by Charu Bari, linking the deaths of bees to pollen from genetically modified (GM) crops. There is another connection between GM and bee deaths and this, in every report I have read about empty hives, the hives are always infested with agribacteria.

This type of bacteria is man-made and used as the gene transfer vector in GM crops. This bacteria, it would appear, also causes loss of memory in bees. it is also a major contributor to memory loss in humans, as with Morgellons disease. 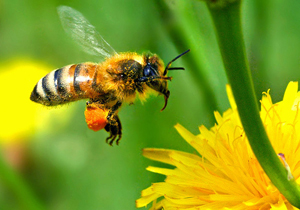 However, bee deaths are not only caused by GM crops as there also seems to be a determined effort to decimate the bee population, carried out by both military and commercial aeroplanes through chemtrails.

We had a perfect example of this a few months ago. This year, 2009, the weather in Britain managed to produce a bumper fruit crop. Along with this abundance also came an abundance of wasps and bees. The crop was so abundant around our house and attracted so many wasps and bees that it was impossible to pick the fruit without the risk of getting stung.

My wife and I live in West Wales and we are used to seeing contrails from commercial aircraft over our area. These trails are always east to west in the sky, vitrually never north to south. Then, one morning in September, we woke up to the sky having a grid pattern of chemtrails, both east-west and north-south closely packed together.

Three days later, there were no wasps or bees to be seen anywhere in the area.  It took several more days before we saw a wasp or a bee again.  Their numbers did recover, but only to a small fraction of what they had been before the chemtrails.  The only conclusion we can reach is that the chemtrails contained some kind of insecticide and was deliberately intended to kill off the wasp and bee populations.

It can only have been an action taken by the governemnt, as it coordinated both military and commercial aircraft.

The only reason for killing off bees and wasps seems to be to support the GM agricultural companies. If the bee population continues to be decimated in this way, then food plants, tress and bushes will not be pollinated and there will be food shortages.

The only benefit in this scenario is to the GM companies, as GM crops do not need natural pollination.  In fact, given the reintroduced “terminator genes” in GM crops, these kind of crops cannot make use of pollination as the cannot set seed.