What do you do when you have tried everything? Sometimes you just get to that point. You know, the point where you feel that nothing you have tried has worked, and you’ve spent so much money and wasted so much time and done everything you can possibly do. And still nothing has worked. And you just want to scream, and cry and give up. I know.

I often speak to people who feel this way. They may email, call, or come in for a consultation and before we even start our discussion, I learn just how long they have struggled to fix their condition and usually how many dollars they have spent doing it. In all honesty, I could sum up the answer to this blog in two words. Keep trying. It is as simple as that, but please let me explain why. 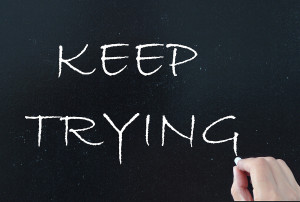 Trust me when I say I know what it is like. I have been working through my own health problems for the last 15 years and I still haven’t cracked it 100%. Yes, I have also spent thousands, tens of thousands, on different treatments, modalities, pills, concoctions, ways of eating, tests and so on and sometimes when things get particularly bad, I think “Well f*#k it, I should just give up.”

But that has never lasted. I might give up for a day, or a few weeks, or a few months, but eventually I always find myself searching again. And the reason why I do, is because the answer is out there. I see people finding their answer on a day to bay basis. But I also understand that what helps one person, may not always help another. And some people (like me) are just super special, and their health problems are a little harder to crack than the majority of the population.

So if you feel you have tried it all, start going through all the modalities you have experimented with. Have you tried naturopathy, nutrition, acupuncture, homeopathy, herbal medicine, chiropractic, massage, osteopathy, counselling, hypnotherapy, yoga, meditation, exercise, Indian medicine, Chinese medicine, Shamanic healing?

Have you given your best to the programs and protocols along the way, stuck to the diets, drank the nasty herbs, avoided the suggested foods, tried the various weird practices?

And if you can answer yes to all these elements, I would still say the same thing. Keep trying. But also please be open to what the next practitioner suggests before you shut them down with a “tried that!” response.

I am thinking of one particular lady who was at her wits end with her son and eczema. She came into the health food store where I work on occasion, and was looking at the wall of supplements. When I asked her if I could help she gave me her story of how she has tried everything, spent thousands and didn’t have anything to show for it. I started at the beginning and asked about diet. She said they had tried all the diets and nothing worked. When I asked about allergy testing and digestion testing, she waved me away with “Tried the prick test, didn’t work”. She then said something along the lines of “Well you don’t seem to have anything new so I won’t waste my money” and left.

So what do you do when you have tried everything? Keep trying everything more. Because one day something will work, and all that trying, and money, and time, and weird diets and tests and supplements and doctors and practitioners… are going to be worth it.

From someone who is still trying. 15 years later