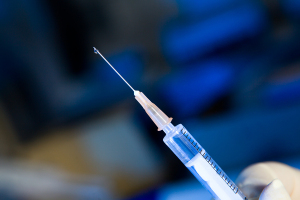 The flu vaccine is one of those ‘medical marvels’ that is talked about in the media as if it is a ‘miracle cure’ for a terminal disease. It is a fantastic example of how the pharmaceutical industry is able to manipulate the media, and therefore the general public, into accepting unnecessary medical intervention and normalising this fact. The fear-mongering centred around the flu is nothing more than a media-driven marketing campaign for a product that is potentially dangerous, and often useless.

Deaths from influenza have been seriously overinflated as a scare tactic to sell this vaccine. The research though, does not correlate this purported fact. The tally of deaths from the flu are combined with deaths from pneumonia, which is a completely different illness, immediately skewing any statistics. The majority of deaths are in people over the age of 70 and the rate of death was declining rapidly prior to the development of, and the widespread use of, the flu vaccine. In fact, as vaccination rates increased, so have deaths from influenza – the opposite of what we are told in the media.

From The Global Research Centre: “A 2009 review by the Cochrane Collaboration identified, retrieved, and assessed all studies evaluating the effects (efficacy, effectiveness and harm) of vaccines against influenza in healthy adults. This study also came to the conclusion that there was insufficient evidence for the use of widespread vaccination for the flu.

In a recent article Peter Doshi, Ph.D reiterated this position. He declared that:

The vaccine may be less beneficial and less safe than has been claimed, and the threat of influenza seems to be overstated… This means that influenza vaccines are approved for use in older people despite any clinical trials demonstrating a reduction in serious outcomes.

He also stated that public officials only need to claim that the vaccine saves lives and that most people, including doctors, assume there is solid research behind the claim and unfortunately that is not the case. So in seniors – the group that has the greatest need – there really isn’t any good science to backup the use of the flu vaccine. 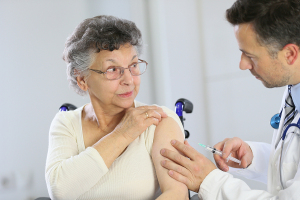 There are many strains of influenza, but true influenza is actually quite rare. ILI’s (influenza-like illnesses) are much more common, and with the strains of flu vaccinated against changing yearly, and able to mutate quite quickly, the efficacy of the flu vaccine is negligible at best. Not to mention the toxic ingredients contained within the vaccine, and the possibility of serious side effects such as Guillain-Barre Syndrome and encephalitis.

The majority of ‘flu related deaths’ are actually caused by pneumonia, a potential complication of influenza, but in the majority of patients who develop pneumonia, very few test positive to the influenza virus. These people are often already immuno-compromised and have pre-existing conditions such as asthma that put them at a higher risk of pneumonia – the flu is not the main culprit in these deaths. So the science overwhelmingly tells us that the flu vaccine is of no benefit, especially in the age groups that are found to be most vulnerable to the flu – the elderly and children – and can in fact be detrimental by raising the rate of ‘flu-like illnesses and infections’ by more than five times than in those who are un-vaccinated, by reducing the effectiveness of the immune system. This evidence is found in hard science, and is the result of double-blind clinically controlled trials – the type of trials that medical science tells us are irrefutable – except when the results don’t suit the agenda.

So why are people so quick to line up for their yearly flu jab? Are they so scared of suffering for a few days with a runny nose, a sore throat, a fever and some aches and pains, that they will subject themselves to a vaccination that science has resoundingly shown has no benefit? The answer is yes. The amount of fear created around the subject of disease leaves people feeling powerless – and when people feel powerless, they look to an authority for answers. Unfortunately in today’s world, that authority is often found in the messages from mainstream media.

There is no room for the understanding that every symptom is a message that is demonstrating  an imbalance in the natural and healthy functioning of the body. We are so conditioned in our society to be afraid of being unwell, that every single tiny symptom has a drug to mask or cover it up. It is not publicised that we actually have the power in our own hands to not only strengthen the immune system to prevent the flu, but we also have a myriad of natural treatments that can reduce its severity and duration. This is empowering. To know that you have tools to combat the flu, is very different from mindlessly lining up to receive an ineffective vaccine because the media told you it was a good thing to do.

Vitamin D has been shown to be a significant factor in preventing certain strains of flu, and remedies that improve the immune system such as supplemental probiotics, vitamin C, propolis, medicinal mushrooms, garlic and herbal medicines such as echinacea, astragalus, and olive leaf, are but a few of the dozens of therapeutic tools we have in our natural medicine toolbox that are safe and effective. Not to mention the solid health foundation that eating a diet primarily of wholefoods brings, as well as regular detoxification practices.

The great enemy of the truth is very often not the lie— deliberate, contrived and dishonest, but the myth, persistent, persuasive, and unrealistic. Belief in myths allows the comfort of opinion  without the discomfort of thought. – John Fitzgerald Kennedy (1917–1963).

The benefits of the flu vaccine are a myth. Rather than fear-mongering – empowering people with the knowledge to take control of their own health, is the responsible way forward.

Yep! At my work we have 300 people and we actually have a van come around and the nurses give vaccinations all day. It is give “free” to employees and my boss acts like the company is doing everyone a great favour and that they are such a generous company for doing the bonus for us.

I cannot believe that 99% of the staff line up to get their shots. They look at me as if I’m an idiot for not getting one, and they wonder what is wrong with me to not want company freebies. I’ve given up arguing, I just don’t bother now, and I never get the flu. But the amount of staff who are off sick through winter anyway is pretty interesting.

Thanks for speaking your truth…all our truths!
Well said
L

I’ve always wondered about the whole flu vaccine issue. I mean, I can understand vaccines for life-threatening diseases, but for the flu? What is wrong with people? I looked up one of the stats you mentioned and you are right, the numbers that are reported in the media are totally wrong. Once of them was that 36,000 people per year were dying of the flu – but that was a computer model of deaths, not real deaths. The real number was actually around 1000 and I think most of those died of pneumonia. So it’s all bull, and people need to wake up.

Thanks Carlie, Lynn & Troy! I appreciate your comments – it is difficult going against the mainstream, but this one is pretty clear-cut and the truth is not being reported.

I’ve seen that too @Carlie – work places giving away free flu shots and thinking that they are doing their workers a great service. It’s crazy!

And yes, Troy, the numbers are totally skewed. Unfortunately that is pretty commonplace when research is being reported.