When I was in Adelaide for the David Wolfe Tour – I met the lovely Remedy Bliss who generously hosted as at her home and shared all her wonderful, wonderful food with us.

One big hit with me, was Rem’s Kale Chips.  She grows the kale in her organic garden, and then makes the yummiest dehydrated chips out it!  I fell in love!  They tasted like traditional cheesy chips, and if Rem wondered why they were disappearing so quickly, I’m afraid I was the culprit.  What better way to get loads of greens into you!

So…  Once I got home I asked Remedy for the recipe which she generously shared with me.  I hope she doesn’t mind me sharing it with you here too – if you are in SA and want to catch Remedy’s raw food classes live – e-mail her at remedybliss@gmail.com 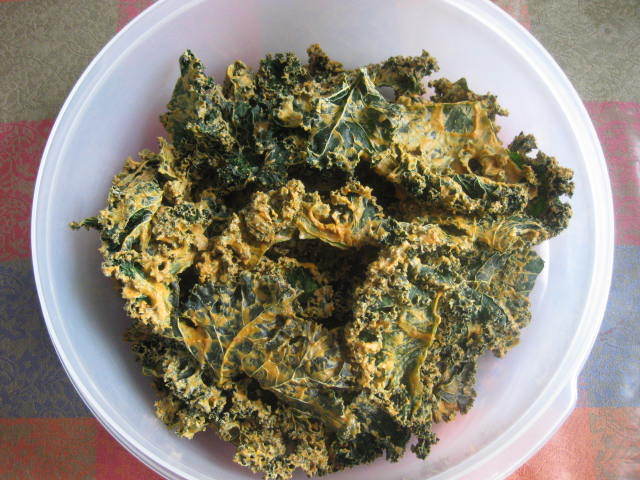 Blend ingredients and pour onto kale and massage through, making sure all pieces are covered.  Place in dehydrator for 4 hours until crispy.

Now, because I’m not a natural in the kitchen (to say the least!), it usually takes me a few go’s with a new recipe until I am familiar with it and find out how to best make it.  The first couple of experiments are more often than not a disaster, until I figure it out.

So off I went on my merry kale chips way.  I couldn’t find the lighter curly kale, so I bought a bunch of the much thicker straight leaf kale and “kitchen klutz” here just chopped it all up, soaked it in the mix really, really well and then dehydrated it.

Instead of a few hours, it took about 36 hours before it became crispy – probably because I had SO much mixture on it and the kale was really thick.  Then after it was done I tasted it, and it was pretty strong (all that extra nutritional yeast I threw in just for fun – why, oh why do I modify recipes??) and I’d left the spines in it instead of just taking the leaves off – so every time I have a piece, I have to spit the really tough, chewy spine out!!!

I had to laugh!  So next time, chop the leaves off, don’t absolutely saturate it by soaking so long, and preferably use the lighter curly kale – do you think I’ve got it now, lol