This is the title of Chapter 2 of Michael Pollan’s great book “In Defense of Food”, and I love the concept that he reveals – that we have become blinded by the ideology of “nutritionism.”

“In the case of nutritionism,” Pollan writes “the widely shared but unexamined assumption is that the key to understanding food is indeed the nutrient.  Put another way: Foods are essentially the sum of their nutrient parts.  From this basic premise flow several others.

Since nutrients, as compared with foods, are invisible and therefore slightly mysterious, it falls to the scientists (and to the journalists through whom the scientists reach the public) to explain the hidden reality of foods to us.

In form this is a quasireligious idea, suggesting the visible world is not the one that really matters, which implies the need for a priesthood.  For to enter a world where your dietary salvation depends on unseen nutrients, you need plenty of expert help. 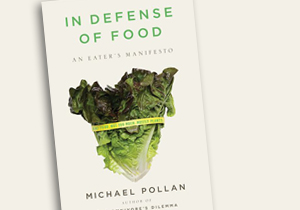 This brings us to another unexamined assumption of nutritionism: that the whole point of eating is to maintain and promote bodily health… paradoxically, regarding food as being about things other than bodily health – like pleasure, say, or sociality or identity – makes people no less healthy; indeed there’s some reason to believe it may make them more healthy.”

Pollan says it well, and it is a sentiment that I echo whenever I talk to people about nutrition – there is so much conflicting information in the “nutritionism” world, that we get lost and confused and don’t know what to eat, so we take all types of nutrient supplements instead.

I, too, got lost in that world for quite a while – lining up the 40 or so bottles of supplements on the counter every morning – one pill to support one function, another pill for another, planning my meals by the nutrient content alone, worrying I was missing out on some vital, little known molecule and my health would fall apart as a result.

Maybe you have to go through that to come out the other side a little wiser, but now I pay very little attention to individual nutrients and pay a lot of attention to the quality and type of food I eat.  And you know what?  My health has improved since the days of swallowing dozens of supplements every day.

Nutritionism is an ideology that fosters many industries (naturopathy being one of them!) and there is a constant flow of marketing and hype for each new “discovery” of the latest and greatest nutrient that you are told you can’t do without!

Funnily enough, the nutrient always was in the food and just because science only recently discovered it, doesn’t mean that it’s any more beneficial than it already was.  There are thousands of undiscovered nutrients in food, so don’t be concerned about the individual nutrients, focus on the food itself.

My best advice is bypass the hype, look to a large variety of whole foods as found in nature, organic wherever possible, learn about high-density superfoods and concentrated greens such as wheatgrass or barley grass – and start enjoying food without the stress!