As most of you would have read in previous posts, I sadly confess to being a regular watcher of “The Biggest Loser”.

Even though I cringe at some of the advice given, I can’t help but enjoy watching the transformation of these people, inside and out, as they progress through the show.

However last night had to be the worst example of food atrocity that I have seen on the show.  It makes me wonder how these poor people are going to remain healthy after losing all that weight….

The challenge was to make a three course meal with each course containing each of one of three ingredients – a course with bok-choy, another with chicken breast, and another with blueberries.

The contestants did fairly well with the entree and main – and even though most of what they prepared was cooked food – it was a healthy variety of vegetables albeit with a good dose of cottage cheese added to some of them. 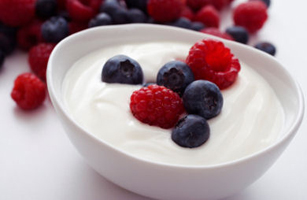 The desserts however were scary.  They took the most beautiful scrumptious fresh blueberries, which would have been perfectly fine on their own, and they just destroyed them.  One blended them with yoghurt and chocolate topping to make a smoothie type dessert, another mixed them with cottage cheese and topped them with raspberry coulis.  But the worst one was Tiffany’s creation.

She took the blueberries, covered them with a sugar substitute called Equal which contains Aspartame (a well known very dangerous neuro-toxin and poison) – which in itself is a disaster in the making – but as well as adding vanilla (which may have been natural, but probably wasn’t), she then put this poisonous mess in the MICROWAVE!!!  That is a complete insult to good food.

Anyone who reads my blog or is a part of the Membership Club, knows that I abhor microwaved food and the least processing we do of our food, the better.   To take a lovely, nutritious, antioxidant and enzyme rich berry with potent healing properties, and bastardise it with aspartame and microwaves in the name of “health” is truly shocking.

When you cleanse your body and eat a diet of fresh whole foods, your taste buds become much more sensitive to natural flavours.  There is no need for added sweeteners or processing of natural foods, as you appreciate the subtle flavours of the real thing.  If only the contestants on The Biggest Loser had had some training in real food, they would probably do much better in maintaining their health long term.

I love blueberries just eaten on their own – and I wrote a post that contains a healthy blueberry smoothie that you will find here: The Brilliant Blueberry

Previous post: Is it Good or Is it Bad?