M is for Melons

Melons are a wonderful fruit to enjoy regularly, especially when they are in season and nice and ripe and juicy!

In correct food combining melons should be eaten by themselves and not combined with any other fruits or foods.  They are best eaten on an empty stomach and make a great start to the day as a tasty breakfast.  You can combine different melons together such as watermelon, honeydew and rockmelon.

Watermelon is one of the most alkalising of all fruits and is a natural diuretic and kidney cleanser and tonic, helping to rebalance fluid levels in the body.  Watermelon is very high in water content, so is fairly low in most nutrients, the exceptions being vitamin A and lycopene – which is found in nearly twice the quantity found in tomatoes.

An amino acid citrulline is also found in plentiful quantities, and being the precursor to arginine, helps to promote circulation, heal wounds, assist in health cell division and remove toxic ammonia from the body. 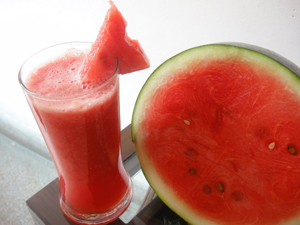 Watermelon can help as a relaxant and balancer of the endocrine system, helping to alleviate depression and regulate hormonal balance especially during menopause.

It is a refreshing drink in hot weather, and contains plenty of antioxidants to fight free radicals.  Watermelon is also a gently stimulant to the large bowel, assisting in the elimination of toxins via this pathway.

Watermelon can be very helpful for anyone suffering with arthritic conditions.  In his book “Manifestor for a New Medicine” Dr. James S. Gordon puts man with severe rheumatoid arthritis on a diet of watermelon only for two weeks with miraculous results!

¼  of a watermelon
1 Lemon, including the peel
OR
1 Knob of ginger