Over the Christmas holidays, I read several books, and Unbearable Lightness by Portia de Rossi was one of them.  The book was an intimate journey through Portia’s battle with anorexia, and provided a chilling insight into the thought patterns that shape and inform this tragic disorder.

Having always been interested in food and health, which can sometimes be a way of exerting control, in my early years I had brushes with anorexia and bulimia but was lucky enough to never move into a full blown manifestation of these diseases.  My flirtation with them was brief, and I moved into a more health conscious and balanced state as I learned and read more and more about food as medicine and healing.  I also saw those problems as a part of the greater issue of low self-esteem and I was already doing a lot of personal development work to heal those demons in my head, which kept me from moving further into problems with food.  Guidance that Portia desperately needed, but didn’t get in those formative developing years.

Unfortunately there are some similarities in the thought patterns of guilt and obsession that cross over into the health and raw food world.  Being 100% raw can be an absolute healing gift for many people, but for some others it can become a dangerous obsession that takes them away from their friends, family and society and is a means of establishing control over themselves and gives a feeling of superiority via that control. That can be harmful and detrimental to health, no matter what type of good quality food is consumed. 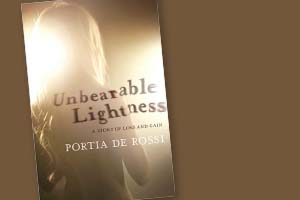 One thing that I loved about this book, was that at the end when Portia was describing her recovery, she says “Managing the disorder – thinking about food to any degree other than something nutritious and enjoyable – is, to me, the very definition of disordered eating. I didn’t just want to maintain my weight, suppress the urge to purge, and still have a list of foods that were ‘safe’ to eat. I never wanted to think about food and weight ever again. For me, that’s the definition of recovered.”

She also describes how she never limits herself in regards to food, and how knowing that she can eat whatever she wants to, whenever she want to, led her to heal. She also credits this way of conscious eating with her natural move into becoming a vegan, as she listened to how her body felt when she ate different foods.  This philosophy around food is very similar to that of Charles Eisenstein, the author of “The Yoga of Eating” (see my blog post Raw Vegan Obsessions) who also recovered his health through letting go of his obsession with “right” and “wrong” food, and developed the practice of mindful eating instead.

I found the book to be an honest and touching memoir, and it clearly highlights the absurdity of our media culture’s fixation on portraying anorexic bodies as the ideal of health.  Let’s not fall for it.

Thanks for your review of Unbearable Lightness. You made some interesting comments.

I have given the 100% raw thing a serious go so I can relate to what you say about obsession with 100% raw and the difficulty that creates with fitting in with family and friends.

I have to say though, I’m not sure about the comment of people trying to establish control over themselves and feeling a sense of superiority. They are certainly not the reasons I have embarked on the journey anyway. My main motivation is to experience the greatest health and vitality that is realistically possible. I would challenge anyone that thinks that is not something worth striving for.

One of the reasons I have given the 100% raw diet a go to achieve that is that there are many raw food advocates out there who claim that it is the best way to do that, e.g. David Wolfe, Dr Gabriel Cousens, and Paul Nison to name a few. They also all say that you go through a difficult transition period and that you need to be strong and disciplined to get through that to achieve the ultimate goal. For me if they didn’t tell me that that is something you need to go through, I would’ve given up by now. But therein lies the reason people try so hard. I think those that you refer to as being obsessed should be encouraged and supported for stepping out of their comfort zone and giving it a go, especially if we still believe that it is the way to the greatest health and vitality achievable. The more people that do it successfully the more we will all know and the more the word will spread. I’m also sure it will be far better for the planet and a more harmonious world to live in.

Dear Matt,
Thank you for taking the time to comment on my blog and I appreciate your honesty and where you are coming from. I think you may have misunderstood a little about what I was saying with obsession and superiority – this is an attitude that you obviously DON’T have, and that shines through in what you have written. If you read my post I say “Being 100% raw can be an absolute healing gift for many people, but for some others it can become a dangerous obsession that takes them away from their friends, family and society and is a means of establishing control over themselves and gives a feeling of superiority via that control.” – with an emphasis on “some others” – I in no way meant to intimate that everyone who takes on a raw food lifestyle becomes obsessive – in my way of thinking -and I apologise if I didn’t make that clear enough in what I wrote – there is a huge difference between dedication, discipline, achieving goals through persistance and meeting challenges – and a negative attitude of obsession and control.

So I think the use of the word obsession is the one that is up for debate here – and in its most positive form I would see the traits above which are to be admired and applauded – but in its worst form (and this is what I was referring to in my post) it can become a whole other force that drives a person from a fear based perspective that is detrimental to their physical and emotional health and their relationships as well as their attitude to food. What I was attempting to highlight, was the commonality I have seen between anorexic thought patterns, and those in a small percentage of raw food obsessives – that is not to implicate raw food in and of itself – this type of attitude can be found in all types of dietary regimes, but as this is mainly a raw food blog, I was making that point.

I hope that explains it, as I in no way meant to denigrate those that are on a healing journey and are dedicated to the pursuit of greater health.
Leis