Gabriel Cousens, M.D. is considered to be a leading medical doctor in the holistic medicine and raw and living food movements today.  In this lecture, Dr Cousens will present new insights on how to use a lifestyle based on organic, plant-source foods in their live, natural state, plus other complementary practices, to create a life full of vitality and joy. 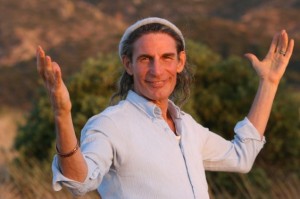 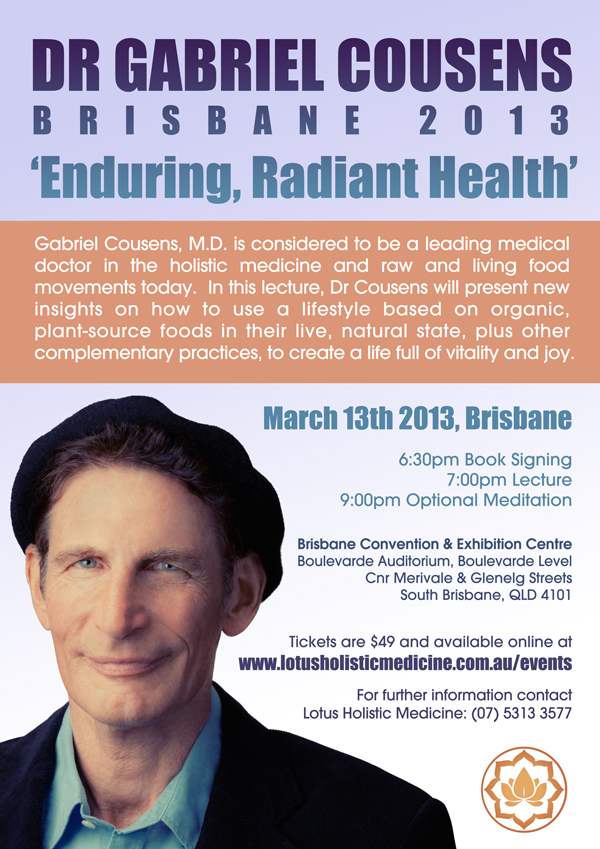 Diabetes is the world’s fastest growing chronic disease. It is estimated that 280 Australians develop diabetes every day. Close to 2 million Australians already have diabetes and half of these are yet to be diagnosed. The incidence in Australia of diagnosed diabetes is increasing by 8-10% every year.

According to Diabetes Australia the total financial cost of type 2 diabetes is estimated at $10.3 billion and as Australia’s fastest growing chronic disease and the sixth leading cause of death in the country it is vital that people are educated about how they can take action to prevent developing it.

Dr Gabriel Cousens, an integrative medical doctor from The Tree of Life Rejuvenation Centre in Arizona, USA reverses type 2 diabetes as a matter of routine. His 21-day “Reversing Diabetes Program” which includes a vegan living food diet, claims a 53% instant success rate in reversing type 2 diabetes totally. Type 2 is the form of diabetes which is developed later in life and is associated with a poor diet and lifestyle habits and obesity; it’s the type of disease that we live ourselves into. Type 1 diabetes is generally contracted in childhood and is an auto-immune problem where the cells of the pancreas that produce insulin are destroyed, causing the person to become dependent on insulin injections.

Oscar winning director James Cameron recently announced that he and his entire family were now vegans, citing that to be a meat eating environmentalist is an oxymoron. He, along with a growing number of celebrities including tennis champions Venus & Serena Williams, Russell Brand, Jason Mraz and Woody Harrelson are proudly extolling the virtues and benefits of consuming a plant based diet for health, ethical and environmental reasons.

Lotus Holistic Medicine is honoured to present the return to Australia of one of the world’s leading authorities on plant based living, Dr Gabriel Cousens. The New York Times describes Dr Cousens as “the fasting guru and detoxification expert” and his last visit here sparked a great deal of interest in the health, environmental and spiritual benefits of transitioning to a living foods diet.

Fantastic Meg! We’ll see you there

Is Gabriel also coming to the Goldcoast ?? Thanks Priya

Will Gabriel be coming to Adelaide? If not where else in Australia will he be?

Hi guys,
I am not the organiser of Dr Gabriel Cousens coming to Australia, so please contact Lotus Holistic Medicine on 07 5352 3468 if you have any questions about the tour and where else Dr Cousens may be presenting!
Thanks,
Leisa

Dr Cousens is presenting on the Gold Coast on Thursday March 14th.

He is presenting in Canberra on Monday March 18th, plus possibly some extra events on the Friday and/or Sunday nights. For this contact Stella Ashton on stella.ashton@principlesofhealth.com.au or Organic Energy by phone on: 02 6295 6700(BH)

Unfortunately he is not presenting in Melbourne, Sydney, Adelaide or Perth due to various reasons and circumstances.