It was with great excitement that we met the arrival of our US visitors – David Wolfe, Bruce Horowitz and assistant Juliana Garske-  and welcomed them to Australia on February 6th.

William and I picked them up from Brisbane Airport, and drove back to the not so sunny Gold Coast.  Thinking that they might enjoy a walk on the beach after dinner, or a look around the famous Surfers Paradise – there was no chance of that as huge storms lashed the coast.  Below is the view from our apartment window – nothing but rain! 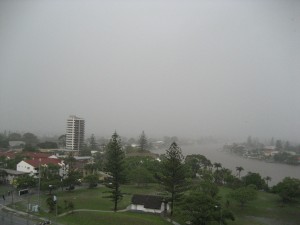 We had fantastic raw living pizza’s, crackers and seed cheese for dinner, provided by Roar Organics, topped off with some magnificent organic greens from the amazing permaculture gardens of David’s friend Tania Leilani who joined us as well.

We left everyone to settle in, with details about a morning yoga class on the beach – hoping the rain would disappear overnight.  No such luck!

Sunday was the day of the Brisbane lecture, the first event of fourteen planned over a three week time frame around Australia.  Brisbane was the test run, being the very first one, and we had a full house of eager people waiting to hear from the man himself.

Our first hiccup came when we arrived at the Bardon Conference Centre.  The auditorium we had booked had been flooded, thanks to the severe storms, and they had to move us to a large L shaped room which only just fit in the number of people we had coming. 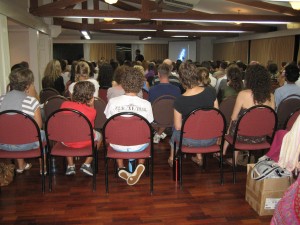 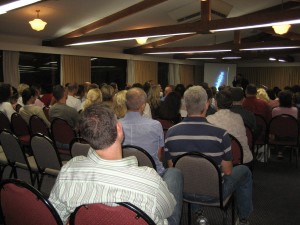 Nevertheless, it turned out to be a fantastic event – David lived up to his reputation as being an extraordinary speaker and presenter, and everyone left inspired and motivated to incorporate many of the ideas he spoke about.

David also very generously spent time with many people in the break and before and after the talk – signing books, being photographed, and answering questions, and was happily available to everyone who attended. 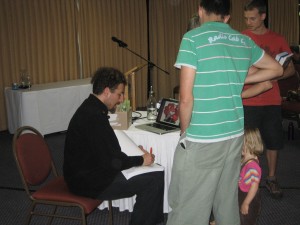 It was a great night, and after the event was all packed up and finished, David, Bruce and Jules headed to Northern NSW to stay with their friend Tania.