Why I Friggin’ Love Natural Medicine

I absolutely LOVE the power of natural medicine and it’s ability to initiate a healing response in the body. Even though I have spent over a decade witnessing miraculous healings through my work primarily with detoxification retreats and utilising food as medicine – healing never ceases to amaze and delight me. 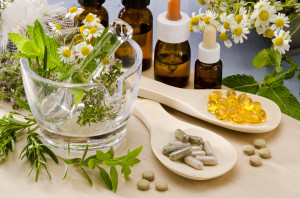 As I teach at my Embracing Health Retreats, it is the job of the natural medicine practitioner to initiate the healing response in the body. The practitioner doesn’t heal the patient – the patient’s body does that, we are just supplying the tools, environment and situation for that to happen. Ann Wigmore said it best when she stated “There is no cure for anything, other than the body’s inherent ability to heal itself.” Very wise words indeed.

Another wise woman who has plenty of knowledge to share is Charlotte Gerson. In the movie Food Matters, she describes healing as a complete phenomenon – that you can’t heal just one symptom of disease, that when you truly heal, everything heals. Which brings me to today’s interesting story.

My partner Dan (fiance!) has always been reasonably fit and health conscious, but never explored food to the level that I take it to. Raw vegan was totally new to him, green smoothies, detox, fasting, juicing, and superfoods were all completely foreign, but he embraced it all with good humour and is now one of my biggest fans, even completing a nine day detox retreat, colonics included.

So while we’ve been together I’ve been slowly raising the quality of his diet (without imposing strict rules or trying to “change” him), and it’s been great, he really notices the difference in how he feels from when he eats “my food” and when he slips back into those old food choices that are not the best.

Just recently I did some pathology testing with him, and from that, put him on a course of supplements that I believed would do him the world of good, and at the same time we went on an eight day green smoothie superfood fast. I didn’t think he would notice all that much as he is pretty healthy with great energy, but I knew what I was doing was going to be working internally and supporting his liver function and raise his saturation of nutrition to a whole new level. This is preventative medicine, and I believe it is essential for all of us in this modern era to saturate ourselves with as much good nutrition as possible, to allow our body to heal and repair as required.

I was right, he didn’t notice too much, other than feeling great on the smoothies – but something quite strange started to happen…

Fifteen years – that’s right, fifteen years ago – Dan caught his thumb in something to do with a cement mixer (he did explain it to me, but it was something to do with boy’s stuff and went over my head), it ripped the nail off his thumb and since then there has been a big hollow under most of his thumb nail where the flesh didn’t grow back and his nail didn’t reattach. He could stick a paperclip under his nail almost to the bottom, that’s how big the gap was. It would get all gross and dirty under there and had been the same for fifteen years. 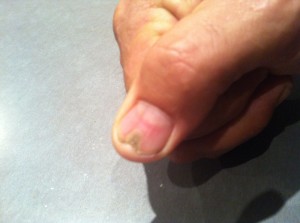 Well, just last week I looked at his thumb and noticed that the huge section that had been disconnected from the nail bed all this time (about 75% of his nail), was much, much smaller. On examination we could see where the flesh had grown back and reattached to the nail, and now we’re watching day by day as this old injury repairs itself and grows out. To me, that is quite amazing, and goes to show that the body will utilise every opportunity to heal, given the right tools and environment – no matter how long it has been injured or unwell. It is just incredible what the body is capable of.

I’m not exactly sure what initiated the healing process of this fifteen year old injury, but needless to say, something did. Whether it was the intensive superfood smoothies, or a nutrient in the supplements that Dan may have been deficient in for fifteen years (such as zinc), whatever it was prompted his body to heal the injury and return to the blueprint of perfection that it is always striving for. The other good thing is that because we can see this healing on the outside, we also know that something good is happening on the inside, whether he can see it and feel it – or not.

It may only be a little thing – but to me it is another reminder of just how much healing potential we do have.

Wow that is amazing Leisa!

Thanks for sharing this, and I would love to see a picture of his nail when it’s all healed up.

Love the healing power of nature!

Great news about the nail and congratulations on your engagement Leisa!