What Happens at a Vegan Wedding?

My partner and I have had a crazy run of weddings over the last few months, and last weekend we attended our final celebration of love for the year. This one was a little different. It was a vegan wedding. The most common question I was asked coming up to the big day was “What happens at a vegan wedding?” And not having ever attended one myself I couldn’t rightly answer. But now I can. And the short answer is “Pretty much the same stuff that happens at a non-vegan wedding, with a few slightly differences” Some of these differences were noticeable, like the fact that there were no meat options during dinner. Other differences were completely unnoticeable, unless you happened to have chatted to the bride about such things like I did. I’ll explain. 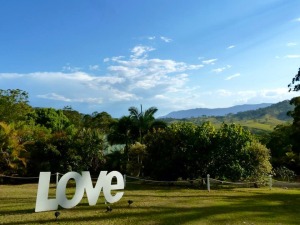 Our friend is a vegan. Her new hubby is not. Neither her family, nor his family are vegan, neither are his friends, nor most of her friends. Out of the whole group congregated to celebrate the wedding, only 2 were vegans that I know of. So this was what I would call a tough crowd. My partner and I were two of three naturopaths at the wedding, and I’d say were in the minority when it came to having experimented with vegan food. But because it was her wedding day, our friend decided she wanted to celebrate in a way that truly resonated with her inner beliefs, she wanted to have a vegan wedding. Although I am not vegan, I can totally understand that on a day celebrating love, you would not want to think of animals who have died to help you do that, or watch your guests eat meat when it went against your beliefs. So when I heard her plans, I thought it was fantastic and couldn’t wait to attend.

The subtle differences I spoke of included the bride’s vegan wedding dress. Yes, I know right? I had absolutely no idea what was ‘animal’ about a wedding dress either. It’s the silk. If the dress has real silk in it, then silk worms made this component, and this was a no go for my friend. She said it was quite difficult to find a wedding dress that she liked that was not made of silk, but she got there eventually, and looked absolutely beautiful. There was nothing about this dress that suggested it was vegan, and I’d say the majority of the guests were none the wiser.

Ok so beautiful setting, gorgeous bride, down the isle, vows, married, kiss, kiss, voila! The bride and groom go off to take some photos and the guests start heading to the bar. The bar offered a generous range of alcoholic beverages including beers, wines, champagne and other non alcoholic drinks I didn’t really pay attention to. Again, a subtle difference- all the alcoholic drinks were vegan… I don’t think this is something the majority of people would relate to animal products either, but with only a little research I found that beer commonly contains animal products including isinglass- a stabilizer coming from the swim bladders of fish, gelatine for stability and clarification and bone char, used to filter beer. Honey is also sometimes used in beer as an ingredient.

In regards to wines and champagne, a substantial number use animal-based products in the “fining” process: clarifying the wine by removing proteins, yeasts and solid materials that would otherwise make the wine cloudy and visually unappealing, or would even create off-flavours or aromas. Fining agents typically used in wineries include egg whites, egg proteins, or casein (milk proteins). So far, this is good news for lacto-ovo vegetarians, but not for strict vegans. However, common fining agents also include gelatine (produced from animal bones), isinglass (made from fish bladders), and chitin (lobster and crab shells).

So all our alcohol was vegan, and very well received from the feedback I heard! Asa drank beer and I drank champagne. Beer doesn’t usually agree with Asa. He tends to get very bad sinus the next day, and he often gets a cracking headache (or hangover) in the morning. What he was surprised to discover, was that not only was the beer delicious (he has found a new favourite), he woke the next day sinus and headache free! 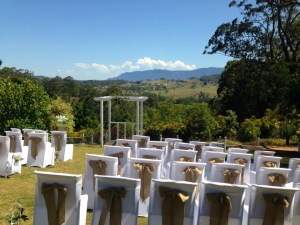 Now to the meal! This was the obvious area that stood out as being MEAT-FREE. While we were waiting for the bride and groom to return from their photos, we enjoyed a range of delicious canapés. I tried some yummy mini pizza style slices, piled high with caramelised red onion, roast pumpkin, basil and pine nut pesto (no cheese), and swirls of nut cheese. I also enjoyed a delicious “meat” ball- beans, and veggies with a tomato spicy sauce. I only heard appreciation for these nibbles, and they were gobbled up quick smart.

The main meal was banquet style, with about 5 dishing being placed in the centre of our table and us allowed to serve ourselves. We chose from a creamy (dairy free) mushroom risotto, tomato and lentil pie, nut cheesy potatoes done gratin style, green beans, and salads. These were devoured with delight (and surprise), by all at our table. And finally the wedding cake- strawberry and vanilla cream shortcake. Yum!

The feedback was interesting. The majority of our table seemed happily surprised at just how yummy, and satisfying their meal was, while some were quick to speculate that the reason the meal was so yummy must be due to heaps of oil, or sugar, or salt that would be substituting the flavour in place of the meat. Asa and I thought everything was delicious. Although I don’t know exactly what was in the risotto or the pie or potatoes, I would hazard a guess that these items were actually a lot healthier than our suspicious table mates believed. And a heck of a lot healthier than some of your more common wedding fare.

This wedding showed me that many people out there are quite unaware of how delicious meals can taste without the use of animal products. And it also brought to my attention, the amount of animal products that spring up in unlikely places such as wedding dresses and beer. Non vegan items that even I as a naturopath, was unaware of. So, what happens at a vegan wedding? Love and life are celebrated, in all ways. The only non-vegan event all day came from the well-meaning lady sitting next to Asa during the ceremony slapping a bumbling little native bee off Asa’s shoulder and squishing it- she thought it was a spider. Luckily the bride didn’t see….

Many happy returns to our beautiful vegan bride and her vegan-friendly beau. Much love and great health and happiness always. Thank you for letting us be part of your special day.

Next post: The REAL Story of Where I’ve Been the Past Year…