Feeling Depressed? It Could Be Your Thyroid…

Depression is such a common disorder today, with some of the highest selling drugs on the market being anti-depressants. People are having trouble coping with life, and there is not just one factor that contributes to depression, but many angles to explore in the uncovering of what is actually going on. 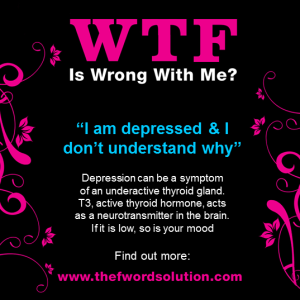 Certainly poor food choices and malnutrition can play a role. If the co-factors to make your happy hormones are deficient, then you are not going to be able to make optimal amounts of neurotransmitters such as serotonin, dopamine, GABA, and beta-endorphins. There are many nutrients involved in balancing brain biochemistry, so optimal nutrition is a key factor in the prevention and healing of depression. Vitamin D is a key factor and one that many people are low in, even in the sunny climate of Australia. Depression can be directly related to the deficiency of this vitamin, and supplementation has positive effects on many types of depression, including SAD (seasonal affective disorder) and post-natal depression. Iodine is another mineral that is often low in depressed patients, and not just because of its relationship with thyroid hormone. I have had patients reverse their depressed state solely through the appropriate dose of iodine to normalise their deficient levels.

Toxins and chemicals from food, water and the environment can cause depression, interfering with neurotransmitter activity and affecting the uptake and utilisation of many key minerals. Detoxification is of primary importance in healing this disorder, ridding the body of elements such as mercury, arsenic, cadmium and lead – all of which can affect brain function.

Gut based imbalances also play a role. Good bacteria (probiotics) are intricately linked with brain biochemistry and healthy levels are needed to prevent depression. I have noticed an association between low levels of one particular bacteria in the gut (analysed through a CDSA test) and when that particular probiotic is replaced, the depression recedes.

Of course there can be many psychological factors that contribute to depression, but when there doesn’t seem to be a reason to explain these feelings, then it pays to look for underlying physical causes. Alongside the ones I’ve just mentioned, the thyroid can be a major reason for feelings of depression. Thyroid hormone itself is a neurotransmitter in the brain, regulating mood function and also upregulating other happy hormones such as serotonin. Without healthy thyroid levels, brain biochemistry can end up very imbalanced. One of the key symptoms of an underactive thyroid is depression (especially when found in conjunction with weight gain and fatigue.) Rather than these people being given anti-depressant medication to alleviate their symptoms, a more holistic treatment program would encompass the healing of the thyroid gland and optimising thyroid hormone levels.

One of the numerous problems with anti-depressant medication is the fact that SSRI’s (serotonin re-uptake inhibitors) contain the chemical fluoxetine, which has been shown in studies to decrease both T3 and T4 levels of thyroid hormone, as well as interfering with T3 metabolism in the brain. So if a person presents at their doctor with a thyroid disorder that is not properly diagnosed, but are given this type of medication, they are going to worsen their thyroid problem and perpetuate a vicious cycle of depression that is going to more and more difficult to heal.

There is a lot of hope for people suffering with depression – it is not a deficiency of medication that is the problem – but a multitude of factors that can be reversed with the correct holistic treatment, encompassing the physical and the emotional.

This is a subject that I will be explore in greater detail in the upcoming book “The ‘F’ Word Solution” being released very soon. To receive an instant download of the 1st section, head to the website www.thefwordsolution.com where you can learn more about this complex issue.

This is very interesting. I have a family history of thyroid disease and there is a lot of depression in my family. Even though my Mum is on thyroxine, she still has a lot of the symptoms you describe, so maybe she is not really getting the help she needs? Will send her this article as I think it is a really important topic. Thank you. Beth