Being Right or Being Kind?

There is a terrific saying that I believe holds within it a very powerful truth: “If you have to choose between being kind and being right, choose being kind and you will always be right“. As with any saying, it can be taken too literally – there is nothing wrong with having healthy boundaries and being assertive. It is when people are so invested in their need to be right that they will do anything to defend their position, that it becomes unhealthy. 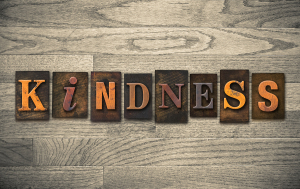 Being emotionally mature means that you have empathy for other people, that you have the ability to walk in someone else’s shoes and are able to take responsibility for your self and your actions. When you receive feedback from another, to be able to take that on board and question yourself as to whether there is any truth in the other person’s perspective, opens yourself to the possibility of learning something. Sometimes there will be value in what another has to say, and inner reflection will lead to growth. At other times you will understand that the view of another has nothing in it for you and is merely a projection of their own inner world. Being able to fluidly move through the emotional dance that we as humans play every day, is a strength that is worth developing.

In the past few weeks I made a mistake. Looking at certain evidence in front of me, I interpreted that evidence in the only way that seemed possible to me at that time, and I shared with the two people involved how disappointed I was in their actions. I was hurt, and I clearly voiced that hurt and my feelings about the situation. Although at the time I felt completely justified in what I said, with further explanation it was clear that I had made an assumption that was actually not true. I had accused two people I cared about deeply of acting unethically. Yes, it did appear that way on the surface, but things were not what they seemed. As soon as an alternative explanation was provided, I was completely remorseful. I was more than willing to accept that I was wrong in this situation, and I offered a very genuine and heartfelt apology. I had made an honest mistake and I could see clearly where I had been wrong. I was sincere in my regret and took the opportunity to reflect on what it was in myself, that led me to make the assumptions that I made. Certainly there was valuable learning in it for me, and of course I am sorry that I caused hurt to people for that understanding to be gained. Being honest about  how you feel is important, but being able to authentically respond to feedback from another is fundamental to healthy relationships. 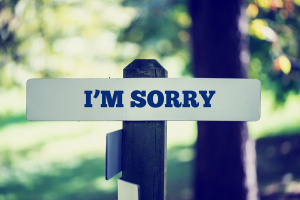 In another incident in the last week, I had the opportunity to reflect on the damage that is done when someone is unable to take responsibility for their actions, and has a desperate need to defend their position to the detriment of a relationship. And it doesn’t have to be big things – where there are slight differences of opinion, sometimes the easiest and kindest thing to say is “I’m sorry for my part in this situation, let’s put it behind us and move on”. That willingness to give a little, to look within to see if there is any truth at all in another person’s view, is not hard to do.

My husband and I both have our own businesses and we also have a joint property development company. So of course we have a lot of interaction with other professionals and at times can be in touch on a very regular basis with them, depending on what projects we have going at the time. Not long ago I received an email from a sub-contractor and in part of it there were statements that I felt were written in a way that made me feel like I’d done something wrong and not provided the correct information, even though I believed I had. So I quick-fired off some questions, and re-reading my email I can certainly see that I was quite abrupt in the way I wrote it. The other party came back and rather than bring up with me personally that she found my communication rude (so that we could resolve the issue), she wrote a reply berating me for the tone of my email, but she made her email public, copying in her secretary and my husband – obviously wanting to gather validation and support for her reprimand of me.

When I wrote back I apologised for my abrupt manner in the email. I explained that my intention was not to come across as aggressive, I just was in a rush and fired off a heap of questions without putting in a polite preface – reading the email back I could see where it may be interpreted as not being completely professional. I also pointed out that I found her tone in emails to be quite accusatory, prompting my rapid and hurried response. As far as I was concerned we were both at fault, and if she felt the need to reprimand me for my “tone” then let’s both acknowledge our parts in this, as it was not a one-sided communication. I apologised and then moved on. Unfortunately there was no give on the other side, no looking at the possibility that maybe I had a point as well, that our communications via email (which is very open to interpretation of tone) were not as professional as they could be from both sides.

Rather than look at her own contribution to our very minor issue, this lady vigorously defended her position of “being right” and unnecessarily escalated the conflict. She chose to not reply to my email. She decided to pass on any business that I was involved with to another person in her firm. She chose to discuss with my husband my “behaviour” and said that she still wanted to deal with him and his business, but was having nothing further to do with me. She was so heavily invested in her egoic need to be “right” that she irrevocably damaged our working relationship – over nothing more than a poorly written email – to the point I have made the decision to cease doing business with this company. Business that was worth tens of thousands of dollars to them. All that she needed to do was to step out of ego for a moment, and write two lines in reply “I apologise if you found my tone accusatory, that was not my intention. Let’s both endeavour to keep our communications professional from this point forward.” I would have said thank you and that would have been the end of it. No harm done, no hard feelings, and the issue resolved. Instead it got ugly. And when someone has to be right at the expense of another, it is always ugly.

Sometimes we need to step back and look at why we might be so heavily invested in being right. Is our sense of self so fragile that the admission of a simple and honest mistake would cause the shattering of the image we hold of ourselves? Is our ego so big, and has such a hold over us, that we have to make other people wrong to feel ok about ourselves? What part of us is so scared of not being ok that we would hurt people rather than take a closer look at the role that we play in our interactions with others?

Emotional IQ is not about being perfect. It is about being able to have healthy self-regulation, to be able to objectively assess your own thoughts, feeling and actions and have awareness of their impact on others. Being right is not always the answer. But opening up to becoming a kinder person? That type of shift can change the world.

I hear you my friend. I have encountered many people like this recently and have been wondering if it is a lesson for me, or if people are just becoming WAY more narcisstic than ever… I’m like you and always will question my own role in conflicts, but geez, the amount of people that will mow you down on the way to proving that they are right, is astounding.

A little emotional maturity would go a long way.

I second the opinion of Simone