It is such a shame that this retreat had to come to an end!!  I’m sure we all could have stayed another week and enjoyed the beautiful relaxing surrounds, good food and friendships that we formed.

The last night was fantastic!  We had our gala dinner where everyone dressed up, we took photo’s, had a great meal, lots of enthusiastic conversation and it was a really fun conclusion to the week.

After dessert had been served though, the guests decided to surprise us – the staff and myself – with some heartfelt thank yous and gifts for us.  Oh my goodness, wasn’t I overwhelmed!  After a week of talking my head off non-stop, I was completely speechless for the first time!

Firstly everyone thanked the Embracing Life! Team – Trudy, Trish, Karen and Lucy – who prepared all of the gourmet food that was so beautifully presented, tasty and healthful.  It is a huge task putting together catering for 25 people four times a day for a week, and they did an exceptional job which was really appreciated by the guests.  They all received a big bunch of flowers and a thank you card and lots of applause! 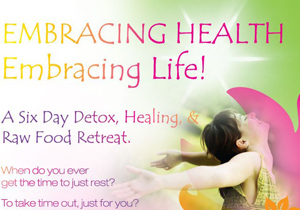 Then it was my turn and my two “male slaves” (private joke!) for the week gave a moving speech and presented me with a gift from the group, of locally made earrings and necklace.  The set was just stunning and I absolutely love it.  Amazingly it matched the dress I was wearing perfectly which is some pretty serious intuition going on there.  I didn’t cry then (well not much), but later on I really let the tears flow – so grateful and moved by the generosity of spirit of the group.

I was so touched, and am so grateful to be able to share the time and space with some of this planet’s most generous and open people.  Coming together the way we did and sharing the experience of the retreat was something very special that I can’t explain, those that were there know what I mean and know that the connection we had moved all of us.  On the last morning we did a group meditation to conclude the week, and afterwards many of us were in tears as we hugged goodbye.

I joked that I am now out of business as I don’t think I will ever be able to top that retreat!!!

But, I will try

Bookings are open now for 2009, so I hope to see new groups of beautiful people come to share in this life-changing experience.  www.embracinghealth.com.au/retreat  See you there!

Also, don’t forget to check out the retreat pictures and the testimonials from this event – they are just brilliant!