Was This Gastric Band Really Needed?

Gaynor Curtis, 49, has struggled with her weight all her life. In January 2005, she underwent a gastric band operation. She lost over seven stone, but suffered complications and nearly died on two separate occasions. Yet Gaynor has no regrets. Here, the receptionist, who lives in Milton Keynes with her husband Tony, 54, an engineer, tells her story: Read more:

This is a really sad story of one woman’s struggle with long-term obesity that developed from a very young age.  Gaynor was an overweight child, who joined her first slimming club in her teens, sending her on a spiral of yo-yo dieting and weight loss drugs to manage her weight.  Inevitably, going off the medications and stopping the restrictive diets always led to putting the pounds back on again, as we know frequently occurs.

What bothered me most about this story were these few paragraphs:

“But this time, things were even worse – and I hit nearly 18st. Nothing I did resulted in long-term weight loss, not even being prescribed thyroxine for an underactive thyroid in my mid-30s. (emphasis mine)

As he gave me the prescription, my GP said ‘You will lose weight now’ – reassuring me that nearly everyone who took thyroxine did. I wasn’t one of them.

I dread to think exactly how much I’ve spent over the years on gym membership, slimming clubs, appetite suppressants, hypnotherapy and anything else that promises miracle weight loss, but I know it’s many thousands of pounds. And nothing – nothing – worked. 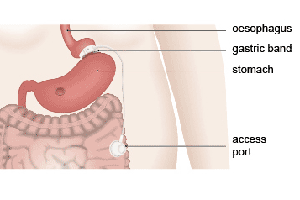 ‘Having a gastric band was my last hope of ever leading a normal – or happy – life. ‘They were – I knew – all thinking I was some gluttonous, lazy woman who sat at home all day eating cake.

How I wanted to scream at them that nothing could be further from the truth.”

Now right here, is the tragedy in this story.  Gaynor had been diagnosed with an underactive thyroid and been prescribed Thyroxine, the medical establishment’s first choice for treating thyroid problems, even though it is the inactive form of the hormone and has been shown to be ineffective in as many as 80% of cases of thyroid dysfunction.

The body needs to convert inactive T4 (Thyroxine) to active T3 before it can act in the cells of the body to regulate metabolism.  There can be any number of reasons why this conversion doesn’t happen properly: liver congestion, low progesterone, poor adrenal function, zinc deficiency, selenium deficiency, iodine insufficiency, as well as other factors such as auto-immune thyroid issues and high levels of Reverse T3.

In any of these cases, the thyroid hormone levels in the blood tests can be perfect, yet the patient experiences all the symptoms of hypothyroidism – weight gain, low body temperature, constipation, depression, anxiety, hair loss, dry skin, puffy eyes etc.  There can be what is called thyroid hormone resistance at a cellular level, but not many doctors know about that…

So here we have a desperate lady with what is likely a very serious metabolic disorder, and all her doctor can do is prescribe Thyroxine because that is what he is taught in medical school, and if that doesn’t work, well then, the patient must be cheating on her diet and she just needs to eat less and exercise more, and we’ll throw in an anti-depressant so she feels better while we’re at it.

There is such ignorance by the medical profession around thyroid hormone dysfunction, that we have an epidemic of people with thyroid disorders, slipping through the system like this lady, knowing there is something wrong but being unable to get the help she needs, until she has to resort to a gastric-band operation to literally starve herself slim.

She nearly died twice ,will never be able to eat normally again, and has ongoing complications requiring medication for life.

Most doctors know very little about thyroid hormone disorders, and in their ignorance and their reliance on blood test results and Thyroxine, they are comdemning thousands of people to untold amounts of distress, illness, maiming and even death.  If you know anyone like Gaynor, please don’t stop until you find an alternative doctor who is well versed on thyroid issues and knows about the options for treating thyroid hormone resistance.

I am so passionate about this subject I am currently writing a book on this very topic, which will be launched early next year!  Watch this space…

i am a lady of 40 and was diagonized of hyperthyroid 10years ago. I lost so much weight and became very skinny weak with palpitation so was placed on carbimazole and inderal. My doctor told me to continue taking it and never reviewed it. So i took it for about 8years!! Now am hypothyroid and gained so much weight and have tried every possible diet to loose it but to no avail. Am presently using levothyroxine and lotrel. Am seroiusly considering gastric bypass. Do you think it is safe for me?

Hi Jummhy,
It would be very irresponsible of me to make any specific recommendation for you off a simple comment on a blog – however, in my opinion gastic bypass operations are NEVER an answer, and the real answer will lie in the disruptioin of your thyroid function and metabolism from the medication you were on for so long. I recommend you read the work of Dr Barry Durrant-Peatfield and Dr John Lowe and explore the area of thyroid dysfunction, as this is more than likely underlying your condition. And then find an integrated medical doctor who works with both natural and orthodox medicine and can evaluate your adrenal status, whether you still have an autoimmune condition going on, whether you have high Reverse T3 and are thyroid hormone resistant, whether you are oestrogen dominant, progesterone deficient, nutrient deficient, calorie deficient etc. Reducing the food intake is not going to be the answer in a complex metabolic issue. I would look into those areas and gain back endocrine and metabolic balance as the path to health.
I hope that gives you some directions to explore and I wish you the best with your recovery.
Leis