From Ninemsn: “Nestle, the company behind Smarties, Chokito and Fantales, has announced it will soon engulf the weight-loss organisation Jenny Craig. The chocolatier and multinational food company said it would acquire, at an undisclosed price, all shares of the group that controls the Jenny Craig franchise in Australia and New Zealand. The acquisition next month will complete Nestle’s takeover of Jenny Craig, a process which began in 2006 with the US$600 million buy-out of its international arm.

The weight-loss company was founded in Australia in 1983 and so it was fitting to reunite it with the growing international business, Jenny Craig chief executive Patti Larchet said on Tuesday. “At Jenny Craig, we are committed to addressing the obesity epidemic and helping our clients lead healthier lives,” Ms Larchet said in a statement issued by Nestle. “As we continue to evolve our program, the Australian market will benefit from our global program innovation and scientific research.”

Jenny Craig also now operates in the US, Canada, Puerto Rico, the UK and France. 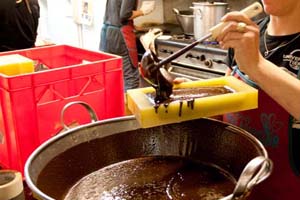 Ms Larchet said the Australian and New Zealand Jenny Craig operations would report to the Jenny Craig global headquarters in California, USA, and the new structure would not require redundancies. When asked about its role in confectionery as well as the weight-loss industry, a Nestle spokesperson said chocolate could be part of a healthy diet. “Chocolate in moderation can be a fun part of a balanced diet, as a treat,” the spokesperson said.

“However, the rise of obesity is a major public health concern around the world, and one which we share, and the Jenny Craig acquisition allows us to help many of our consumers.”

Goodness, I can think of nothing more hypocritical, than a maker of junk foods, taking over a weight loss company.  Although I guess it is on par with the pharmaceutical industry taking over health, or Kentucky Fried Chicken raising money for breast cancer research…

Oh my goodness Leisa – I wholeheartedly agree with you. That same company, many years ago, went into third world countries and gave FREE baby formula to the lactating mothers. Of course FREE was only until the mothers dried up. Then they could not afford the formula – cunning, and so underhand. Avoid Nestle.
I also give the heart foundation a wide berth. Any group that is able to PAY, can get the tick of approval. Where are we going?
Have you, by the way, read the book ‘Excitotoxins: The Taste that Killls’? it’s a must-read for anyone committed to a better way of life.

Hi Maria,
Corporate greed has done many, many horrible things and yes, they are one company that I avoid. Yes, I read Excitotoxins many years ago and have a lot of respect for the work of Dr Russell Blaylock. I agree, it’s a definite must read for a lot of people, but I’m sure the producers of excitotoxins in our food would have something to say about that. It’s up to each of us to spread the information as widely as we can and those who are ready to hear it and change their lives, will do so.
Leis