From ninemsn:  “Australians may pride themselves on their sporting prowess, but moves to supersize toilets, coffins and ambulances are signs the country is grappling with record levels of obesity.

“Australia has an illusion of being a nation of sportsmen and women,” said Deakin University obesity expert Boyd Swinburn.

More than 7.5 million Australians are now estimated to be overweight or obese, accounting for two-thirds of all men, half the women and one quarter of the nation’s children.

International studies consistently rank Australia among the fattest countries in the world, with the nation’s Baker Heart Institute in 2008 suggesting it faced a “fat bomb” outranking even that in the United States.

The Royal Flying Doctors, Australia’s iconic outback air ambulance, is the latest service to supersize, announcing last month that it was seeking larger aircraft to cope with heavier patients. 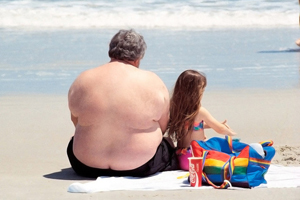 “Obesity stands alongside our ageing population as the most significant challenge facing our health system,” an ambulance spokeswoman said.

“The prevalence of overweight and obesity within our community is at an all-time high,” she said.”

I’ve written about obesity a few times on this blog (Perspective on Weight Loss) – or just put “obesity” in the search field.  It is obviously an ongoing problem, and of course there is a lot more to it than just “eat less and exercise more” – but at least starting with changing food habits is going to be a step in the right direction.

With all the different diets out there that have massive restrictions, that count calories and weigh portions etc, it is no wonder that people associate diet with torture.  They have to force themselves to “go on a diet” and it is an unpleasant experience that is not usually made up for by losing weight, because the weight goes back on again when the “diet” is over.

Which is why I love the whole food and raw food lifestyle.  There is no counting calories or worrying about portion sizes, the only thing I would keep in mind is watching the fat intake, but not eliminating it.  It is only a small shift in learning about real food and how to prepare it so that you can eat good amounts of food, enjoy the flavours, and be very satisfied.  If you don’t feel deprived or like you are being punished, then you are much more likely to stay with the changes.  And with this lifestyle, you also get to feel great AND keep the excess weight off long term!

It is not about a diet, it is about lifestyle choices – and this is such a huge subject I’m not going into it here – suffice to say that the obesity “epidemic” (isn’t that a word that means the widespread outbreak of an infectious disease????) could be solved very simply by choosing whole living foods as found in nature and shunning anything that has been processed.  It can be that simple….