Thyroid sufferers are some of the bravest people I know. Often struggling through life without a proper diagnosis, the fatigue, weight gain, and depression that are the cornerstone symptoms of a thyroid disorder, are a constant in their lives. These people know that something is wrong, but have been unable to find the help they need. Quite often their doctor will do some basic blood tests, and if the results come back within the normal range they are told that there is nothing wrong with them. They  might be told to take an anti-depressant, to eat less and exercise more, and get some more sleep. Unfortunately this advice is next to useless for hypothyroid sufferers and could actually be dangerous. 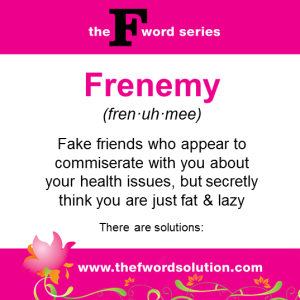 Besides having what can often be quite a severe chronic illness, one of the hardest things that I found while peresonally suffering with an underactive thyroid, and one of the common themes I encounter in my patients, is the lack of validation and support from people in our lives. Because we don’t have an obvious illness and can appear to others to look OK, it can be disheartening when friends judge you as maybe eating too much and that’s why you’ve gained weight, or that you don’t exercise enough. Or they compare their normal tiredness from a long day, to your constant and debilitating fatigue. I’m quite certain that people don’t mean to be dismissive of our very genuine illness, but they have trouble understanding just how difficult it can be living with this type of chronic disorder.

Fatigue is different from being a bit tired. It can be an all-consuming, crushing fatigue that makes simple tasks into something requiring almost superhuman effort. I know when I was at my worst, just having a shower and getting dressed was as much effort as I was able to make that day. If I managed to get dinner on the table as well, then that was a win. Pacing ourselves becomes the new normal – budgeting our scant reserves of energy so that we don’t totally burn-out. We might schedule lunch with a friend and appear to be quite ‘normal’, but what that friend doesn’t know is that it took us hours to get ready, resting in-between each stage of shower, hair, make-up and getting dressed, and that we collapse afterwards, laying on the lounge for hours until we recover from the effort the lunch took.

Not everyone has fatigue that is quite as bad as that, but even mild to moderate fatigue can play havoc in the lives of hypothyroid sufferers. It just makes everything twice as hard. Yet little allowance is ever made for them, and the person is just expected to soldier on as normal. So the thyroid patient does. They fight the fatigue, they push themselves harder than anyone would ever believe, and they mostly suffer in silence. They feel ashamed as the weight creeps on despite eating healthfully and exercising as much as they are able, and they despair at their body not responding the way they believe it should. Without the right diagnosis and naturoapthic treatment, the cycle continues until they are leading lives that are just a shadow of what they would be capable of achieving, were they healed of their thyroid issues.

So if you have someone in your life that you notice has been gaining weight, withdrawing socially, and is struggling with what you would consider to be basic day-to-day activities, they may just have an undiagnosed thyroid condition. Don’t be a frenemy and give them advice on a great new diet or tell them they just need to get out and exercise some more – understand that there are thousands of women that are suffering in silence and just might need pointing in the right direction to get the genuine help they need.

I tell my story of suffering with a severe thyroid disorder in my in my upcoming book The ‘F’ Word Solution: Fed up with feeling fat, fatigued & forgotten? Finally the formula for a fun, fit and fantastic future! You can downloand the entire first section of the book from the website www.thefwordsolution.com

Alternatively, if you or someone you know has a suspected thyroid condition, you are welcome to book in to see me in clinic for a full naturopathic consultation. See www.embracinghealth.com.au/naturopath for details.

Oh. My. God. This is so me. I have a thyroid disorder that is finally being treated properly now, but I’ve been to hell and back with it. I put on twenty kg and was so tired I could barely work – but all I copped from my friends was “try this diet” or “come with me to cross training, you’ll get fit there”. I tried to tell them that I was sick, but they just DIDN’T GET IT! Some of them aren’t my friends anymore after they were so judgemental about my weight I had to move on. It can be hard, and no-one does understand unless they’ve been through it.

Yes, this is me too. Looking fine on the outside – and possibly nobody close to me understanding quite how it feels to be so sapped of energy on the inside.

Happily I’m on the (slow) road to healing – and I share my story with others too, as thyroid does so fly under the radar.