Diagnosing adrenal fatigue isn’t as simple as having a quick blood test and getting a yes or no answer. In fact most doctors have no idea about adrenal fatigue and don’t actually believe that the condition exists! However, in the same way that type 2 diabetes doesn’t just “appear”‘ overnight with is a measurable deterioration in the ability of insulin to do its job over time – the adrenals also come with their own warning system that things are heading downhill. 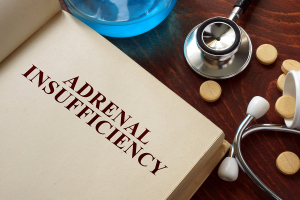 When diagnosing adrenal fatigue one of the first things that I assess will be a person’s symptoms – and they can be tricky. Some of the symptoms of both high and low cortisol levels are exactly the same, so it is quite easy to misdiagnose this issue. In an ideal world we release a burst of cortisol in the early hours of the morning which helps to turn off our sleep hormone melatonin, and gets us into action for the day. Cortisol in healthy amounts produces energy, it regulates our blood sugar levels and immune system, dampens inflammation and enhances cognition. Cortisol gradually declines during the day until evening when there is a not a great deal left in our system, allowing melatonin, our sleep hormone to be produced.

Most people will initially go through a stage of having cortisol levels that are much too high. This is called the resistance phase of stress and people can live in this state of everyday stress for years, if not decades. It is very damaging to the body and is related to hundreds of chronic diseases, including heart disease and cancer. For some people though, after being in the resistance phase for a period of time, their adrenals start to fail and cortisol levels decline. This can be due to high levels of ongoing stress, nutrient deficiencies, toxins, a physical or emotional trauma, or injury. Most commonly it creeps up on people over time, but for some it can come on quite quickly after trauma or injury.

Some of the symptoms that a person would experience in adrenal fatigue are:

The most accurate way to measure cortisol levels is via Saliva Hormone Testing. This is a simple test that you can do at home, sending the saliva samples off to the lab for analysis. The cortisol is collected four times during the day and evening to assess for the pattern of cortisol release. If cortisol shows high levels of an evening for example, that is going to affect the ability to sleep which can be an important factor. During a blood test, the cortisol is only taken once, and as blood tests are quite stressful, you may not be seeing an accurate representation of what cortisol levels normally look like. Here is an example of quite severe adrenal fatigue, where that patient barely has enough cortisol to function of a morning, and then the levels drop to drastically low levels throughout the day. This is a clear sign of adrenal fatigue.

There are three main treatment protocols for adrenal fatigue, and finding a good naturopathic practitioner who knows which stage of adrenal fatigue you are at, and how to treat it properly is essential for recovery. The first stage of adrenal fatigue can be supported through food as medicine, herbs and supplements. Stress reduction techniques are important, as is gentle exercise to tolerance levels and self-nurturing practices. The second stage is for people who may have been in exhaustion for some time, or who are not responding well to treatment. These can also be people who are in a very stressful situation they are unable to remove themselves from at that point in time. For these patients I may have to move them onto an adrenal glandular extract alongside their herbal regime. The last stage is severe adrenal fatigue and this is where a patient may need replacement hormone for a period of time to assist their body in recovery. They would still use naturopathic principles to heal the underlying causative factors, but need the hormone replaced for a short time to allow function (and therefore healing) to occur.

If you suspect you are suffering with adrenal fatigue, the first place to look is at having a full Salivary Hormone Profile to determine exactly how your adrenals are functioning. As many of the symptoms of low cortisol levels such as fatigue, can appear in both high and low cortisol, it is best to have the saliva test so that you know exactly what is going on. From there a comprehensive protocol can be drawn up by your naturopath to address the imbalances. If you wanted to discuss adrenal fatigue or saliva hormone testing in more detail before you go any further, I offer fifteen minute consultations where I can address all your questions and concerns. Don’t let fatigue hold you back from living life to the full – there are answers, and they’re not that far away.

When diagnosing adrenal fatigue one of the first things that I assess will be a person’s symptoms – and they can be tricky. Some of the symptoms of both high and low cortisol levels are exactly the same,

I never thought that something like adrenal fatigue can be a big deal on the medical community. Not a lot of people are aware that it exist and though it is very tricky to diagnose, at least something could be done about it. Thanks for the info. This is so worth reading.