Now when we think of the chick pea, we don’t automatically think “yum, I’ve just got to have some of those!”

But the humble chick pea is so full of goodness that we just can’t overlook it.

In many traditional cultures the chick pea is a staple of the diet, being ground into flour to produce the base for cous cous and as the main ingredient in falafels. 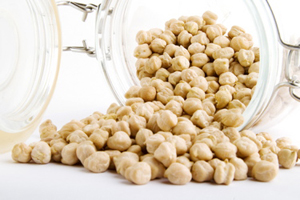 Supplying a good amount of available protein, many people around the world rely on chick peas in combination with whole grains for their protein needs.

Chick peas contain high amounts of calcium, iron, phosphorous and potassium, as well as containing many other minerals and vitamins.