Q is for Quinoa

Ha Ha!  I bet you thought I couldn’t come up with a raw food starting with “Q” but here we are – quinoa!  (I will be stumped though, when I get to the end of the alphabet I’m sure!)

I was doing a bit of a search on Quinoa and found the most lovely post below from Earth Mother – In the Raw Blogspot:

“I fell in love with quinoa (pronounced keen-wah) the first time I ever tried it in Ecuador. It’s a staple food of the Quechua, the indigenous people of the South American Andes. The ancient Incas called quinoa the “mother grain” and revered it as sacred.

Technically, quinoa isn’t a grain at all, but the seed of the Goosefoot plant. Grain. Seed. Whatever. I just love its delicate, slightly nutty flavor and the fact that it’s gluten-free. It’s also considered to be a complete protein due to the presence of all eight essential amino acids needed for tissue development in humans. Grains like barley, wheat, and rice generally have less than half the protein of quinoa.

The seeds cook very quickly and always provided a nice, fluffy texture to my stews and soups. The thought of giving up my beloved little grain when I transitioned to a raw foods diet made me very sad. That is, until I discovered that quinoa seeds can be sprouted and eaten as raw, live food in salads and wraps. Turns out, it sprouts almost as quickly as it cooks. Well, not quite, but in 8-12 hours you have little baby quinoa sprouts. Hallelujah for the living mother grain! 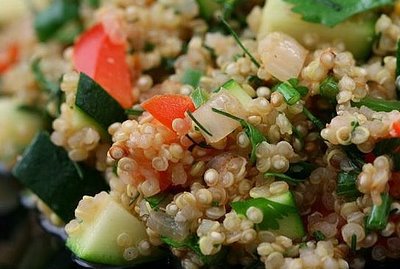 Hello. I’m glad you enjoyed the article. Thank you for crediting me and linking back to the site. I do hope you’ll try sprouting some quinoa and making the Marinated Salad. You’ll be hooked too. Promise.