“(NaturalNews) Anyone interested in healthy and nutritious foods has probably heard that whole grains are far better for you than the processed variety like white bread and sugar-laden cereals. There are several reasons for this, including the fact whole foods tend to be richer in fiber and they also have low glycemic indexes. That means they keep blood sugar and insulin levels steady without wide fluctuations. But a new study published in the Journal of the American College of Cardiology concludes there’s another important reason to avoid high glycemic foods like white bread and corn flakes. For the first time, scientists have documented how eating these foods can directly damage artery walls and cause cardiac problems.

“It’s very hard to predict heart disease,” Dr. Michael Shechter of Tel Aviv University’s Sackler School of Medicine and the Heart Institute of Sheba Medical Center, said in a statement to the media. “But doctors know that high glycemic foods rapidly increase blood sugar. Those who binge on these foods have a greater chance of sudden death from heart attack. Our research connects the dots, showing the link between diet and what’s happening in real time in the arteries.” 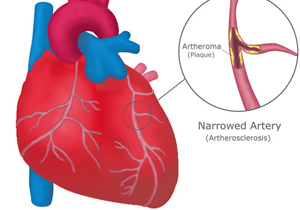 For his study, Dr Shechter and colleagues worked with 56 healthy volunteers who were divided into four groups. One group ate cornflake cereal mixed with milk, a second consumed a pure sugar mixture, the third group ate bran flakes and the last group took water (as a placebo control). Over the course of four weeks, Dr. Shechter applied brachial reactive testing to the research subjects in each group. This test, a clinical and research technique pioneered by Dr. Shechter’s laboratory, uses a blood pressure type cuff on the arm that is able to visualize what happens inside arteries before, during and after eating various foods.”