The International Whaling Commission has just unveiled a proposal to legalize commercial whale hunting for the first time in 24 years.

Countries are now deciding their first responses — and they’re watching public reaction closely. New Zealand called its provisions — which include a legal quota for hunting endangered fin whales — “offensive,” “unacceptable,” and “inflammatory.” But other key nations are rumoured to be leaning in support of it. They need to hear from us now.

Avaaz has launched an urgent petition to show our leaders their people want to protect whales, not hunt, kill, and sell them. Already, 600,000 people have signed — and the petition is being sent to the International Whaling Commission each time it reaches another 100,000 signatures. Sign here and forward this message:

A strong international consensus has opposed whaling for decades — but for just as long, Japan, Norway, and Iceland have continued to hunt whales, ignoring the global ban on whaling or exploiting a loophole by claiming their expeditions were “scientific research.” Now they could be rewarded by this “compromise” proposal, in which their commercial whaling would be made legal in exchange for unenforceable promises to slowly reduce their yearly catch.

Worse still, a number of other countries are watching the process closely in hopes of launching their own whaling programs. If Japan, Norway, and Iceland can hunt whales and sell their meat, others will ask “if them, why not us?”

It’s time to save the whales — again. The IWC proposal will be voted up or down by country delegates this June, but their positions are hardening fast — let’s respond massively, right away, everywhere. Click below and forward this message to oppose the legalization of commercial whale hunting: 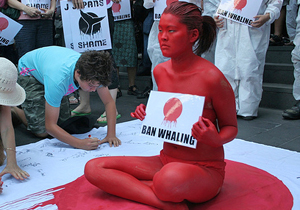 Forty years ago, whales were on the brink of extinction. But thanks to a global social movement, the world banned commercial whaling in 1986. The ban is one of the environmental movement’s great triumphs.

Today, whales still face many threats: not just the whalers’ harpoons, but also climate change, destruction of ecosystems by overfishing and pollution, and nets intended for other fish. A renewed wave of commercial whaling could devastate these extraordinarily intelligent and social cousins of humanity. This is no time to move backwards.