Vegetable Gardening is a Crime?

Only in America! We hope

We want to see MORE veggie gardens in people’s homes, not less!

From ABC news: Julie Bass faces the prospect of going to jail for what she’s growing in her front yard. The illegal growth is tomatos. And zuchinis, peppers and other edible and what normally would be legal plants.

The officials in Bass’ hometown of Oak Park, Mich., have charged her with growing “vegetable garden in front yard space.” If convicted, she could spend up to 93 days in jail. Bass said that the criminal charge “blew my mind.” “Sometimes we laugh because it seems so silly and sometimes we cry because it’s so pathetic. A lot of times it does not seem real,” she told ABCNews.com. 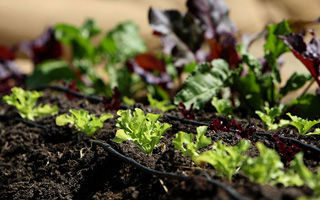 Bass has insisted on a jury trial and a pre-trial hearing is set for July 26. If the case goes to court Bass’ attorney Solomon Radner does not believe that a jury will convict his client of a crime.

“Michelle Obama plants vegetables on White House front lawn. I don’t think the jury is going to think that it’s suitable for the White House, but it’s not suitable for Oak Park,” said Radner. The first lady’s office, which is encouraging growing fresh vegetables to help fight childhood obesity, declined to comment on the Oak Park vegetable case.

Bass got the idea to plant a garden in front yard after it was torn up over a busted sewage pipe.

“There were piles of dirt outside and we knew we had to do something,” Bass said. “We looked into putting in sod but it was shockingly expensive, so we starting looking into other books to do something a little more cost effective. We found pictures in a bunch of different library books of garden beds. It was perfect and we had a blank canvas.”

According to Bass,the family hired professionals to make the planter boxes, bought tomato trellises, paving stones and a swing at a cost of over $500. “What I understood is that they wanted something that would look nice,” Bass said. “We thought that if we do it in a nice orderly way, we could make it pretty and aesthetically pleasing.”