After a great Sunday afternoon event at Byron Bay (besides the heat!), the next event was a day at Tania Leilani’s permaculture farm in the Mullumbimby Hinterland. I wrote this last year, and stand by my words!

“After a few days of rest and relaxation in the hinterland of Northern NSW, the next event was a very special one – a small group of people were privileged to spend a day at the magnificent permaculture gardens of Tania Leilani. 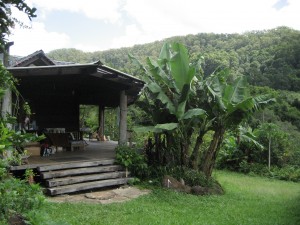 Nestled in the rainforest and pristine bushland, Tania has created a paradise on earth, using the natural contours of the earth to shape a wild edible garden that nourishes as much as it gives visual pleasure. Created over the past 10 years, Tania has transformed barren dairy grazing land, into a lush, fertile forest just teeming with life and energy. 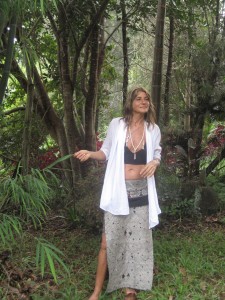 The open plan style of home built from completely natural materials is a haven of peace and tranquility. Being so open you feel a part of the surrounding forest and after spending a few hours, you start to wonder how we manage to live in cities, so far removed from this type of space. 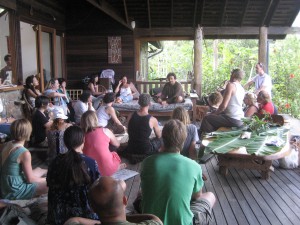 Part of the day included a tour with David and Tania, exploring the gardens and the concepts behind the way it has been planted, as well as picking food to eat straight from the garden! 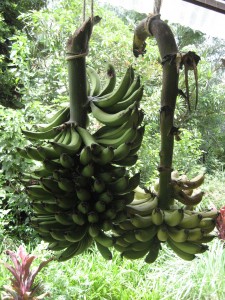 The most beautiful lunch was lovingly prepared from food growing around the house, and Tania spoke about the different foods, why they were used in the combinations they were, the properties of them, their effect on the body, and even the energetics of the different plants. 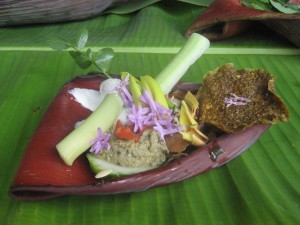 After lunch, David held court in his hammock, and spent a fascinating few hours discussing all manner of subjects to do with the earth, permaculture, sustainable living, Rudolf Steiner’s work and other luminaries in this field, as well as going off on many tangents that were as diverse as they were illuminating. Tania also generously shared with us her living proof of an alternative way of living. I think we could have stayed for days listening to the shared wisdom!”

Oh my, your food looks yummy, does it really? I have been trying to find ways to stay healthy but its hard. Eating raw food seems like a good way to go… Do you have other suggestions on how to become really healthy as well?