Ok, the last state in the tour!  What a whirlwind it has been, and an incredibly successful tour with every single event sold to capacity!

We arrived at Perth Airport and I went to pick up the hire car for us – and found that we had been upgraded to a Nissan Patrol.  I hadn’t booked a car that big, and I argued with the lady at the desk, not wanting to drive a car that was as big as a tank.  However, it ended up being one of those small but significant synchronicities where the universe just knows better – and the car came in very handy when we were at Dunsborough as you will see later on in the next post.

We were met by our hosts Chris & Kate Quinn (whom I knew from having Kate work for me at my first WA Retreat) and we jumped in our tank and followed them to the home of a friend of mine, John Wood.  John is the gentleman I interviewed in my “Raw for 900 Days” CD and if you haven’t listened to it yet – you are missing out!  It is a goldmine of information on healing with raw food and it is available for you to download in the first Module of the Embracing Health Membership Club –  join up today and reap the benefits!

When we arrived John had just picked a huge watermelon from his garden and sliced it up for us – I have never tasted anything so refreshing and delicious!  We pretty much devoured the whole watermelon between us, before our other friends arrived and we sat down to a super lunch!  John prepared a tasty raw vegetable soup, and Damian made some of the best raw pizza’s I have ever tasted!  Therese, owner of Sunbread bought a huge range of dehydrated crackers, wraps and Sunbreads for us to try, along with a sprouted almond hummous – I love raw food feasts! 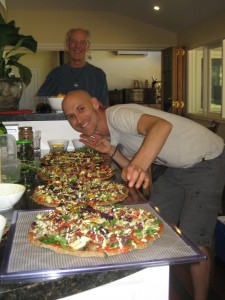 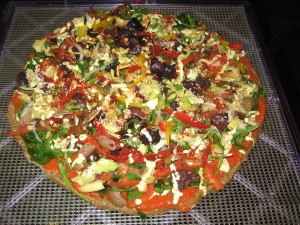 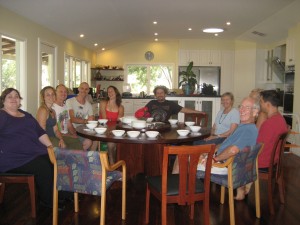 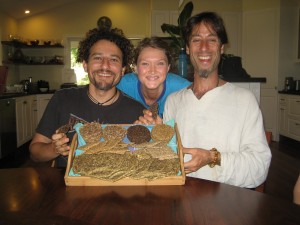 After lunch we headed back to Chris & Kate’s house where we settled ourselves in and got ready for the evening’s lecture.  Perth put on a wonderful evening – it was a sold-out event with people sitting on the stairs we were so full !  The most beautiful people from Roar Vanilla set up our products table which looked sensational, and Emma and Co from The Raw Kitchen supplied everyone with incredible raw food!  It was a very successful event, and a huge thank you to all involved in putting it together. 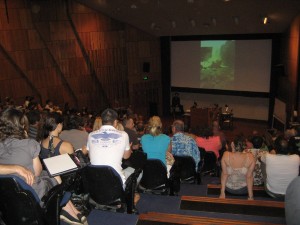