Do What You Will Do!

These short and sweet words of wisdom come from raw food speaker and author David Wolfe – “do what you will do”. It sounds quite obvious, but for some reason it isn’t always as straightforward as it sounds. Many of us hold ourselves to very high ideals and lofty visions about what we want to do each day for our health. This can include not just healthy food preparation, but can include exercise, yoga, meditation, body-work therapies, personal development and much, much more. 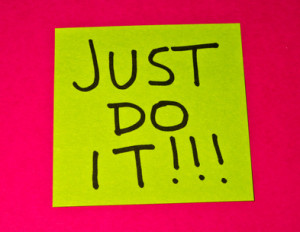 The problem with having a lot of knowledge on health and a hundred things that you could do each day to enhance your health, is that it can sometimes lead to “analysis paralysis’. Where you have so many choices that you end up doing nothing at all! Or you frustrate yourself trying to do things for your health that you think you ‘should’ do, but find them difficult or tedious and end up not doing them, and feeling very guilty about it.

What David was talking about when he discussed this concept, was his aversion to cleaning the juicer. He just wouldn’t do it – he knew juice was good for him, and if someone offered him a juice he would happily drink it – but when it came to juicing himself, and cleaning the juicer, he would avoid it at all costs. So instead of lamenting the fact that he wasn’t juicing enough, beating himself up saying “I know I should drink juice every day, it is so good for me!” or feeling guilty and frustrated – he looked at what he would do. And that was blending. He had no issue with cleaning the blender, so instead of juicing, he blended smoothies instead and got his greens, fruits and vegetables in that way.

For myself, I know that there is no way I will exercise at the end of the day. No matter how good my intentions are, if I start working of a morning, with every intention in the world of finishing at 4.30pm and exercising, it just doesn’t happen. I get caught up, I’m enjoying what I do, I am often in the middle of something, and I just find that nine times out of ten, I won’t exercise in that circumstance. However, I will exercise first thing of a morning without any trouble at all. So I do more of ‘what I will do’. This does take some discipline, I must not sit down at my computer until AFTER I have exercised for the day because I know myself very well and know how easy it is to get caught – so no work until I’ve exercised. But this is something that I will do, so I take notice of that.

It is not about being completely undisciplined and doing nothing – it is about finding those healthful practices that come easier than others and the making sure you do them. It is much more pleasant to implement things that come easy to you, than those that are difficult that you struggle with. Sure, learning something and gaining new skills doesn’t always come easily, and there is much value in pushing through the discomfort and creating a new habit. What I am talking about here however, is not to do with learning new things so much, as to prioritising the healthful  habits that you are already familiar with, and ensuring that you keep doing what you know you will do! Rather than wasting time and mental energy on those things that you just know you won’t do.

Sometimes it helps to have the simple things pointed out to us! To remind us that we are likely already doing plenty and to just keep on doing what we will do, each and every day!

This is me!!! I hate cleaning the juicer and never do it, but I am a great smoothie maker. Glad to know I am in good company with Mr Wolfe!!!