Genetic modification has been cropping up a lot for me over the past week (no pun intended). In all different areas I feel like GMO is getting harder and harder to avoid. 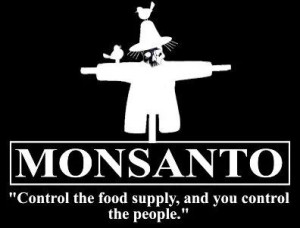 It started on Sunday when we went for our organic farm tour as part of the Food Prep Intensive Retreat. One of the farmers was talking about a particular crop where the insecticide commonly known as ‘Roundup’ was now being bred into them. Roundup is a glyphosate, a broad-spectrum systemic herbicide used to kill weeds. It was discovered to be a herbicide by Monsanto chemist John E. Franz in 1970.  Monsanto brought it to market in the 1970s. It was quickly adopted by farmers, even more so when Monsanto introduced glyphosate-resistant crops, enabling farmers to kill weeds without killing their crops.

Despite studies claiming glyphosate does not bioaccumulate in animals, its mode of action is to inhibit an enzyme involved in the synthesis of the aromatic amino acids tyrosine, tryptophan and phenylalanine in the plant. Personally, I am uncomfortable about consuming a plant that contains a chemical that can inhibit in plants, the amino acids we also produce to balance mood and keep us happy.

The next GMO related flag that popped up was a Facebook meme I have placed above: “Monsanto- Control the food supply, and you control the people.” Very scary, but very true. I have heard conspiracy theories going around that it is no longer legal to grow your own fruit and vegetables in America. In the 2009 documentary Collapse, Michael Ruppert summarizes current energy and economic issues, focusing mainly around the core concepts of peak oil and sustainable development. He mentions the fact that in trying to be self sustaining, growing his own food and so on, he has been hounded by the government and pushed to breaking point. It is a fascinating documentary. His ideas may be far-fetched some times, and down-right frightening at other times, but as a film reviewer at the Toronto Film Festival put it, “You may want to dispute (Ruppert), but more than that you’ll want to hear him, because what he says — right or wrong, prophecy or paranoia — takes up residence in your mind.” To watch the whole movie (80 minutes), click here.

My final brush with GMO this week really did bring an “Oh My Goodness” to my lips. I watched a short clip posted by Raw for Beauty, about the genetic modification and selective breeding done on beef cattle. These cows are selected because of their mutated genes which continue the growth and development of muscle to gross proportions. Each muscle is approximately double the ‘normal’ size, and as a result, these cows have their whole physicality tinkered with for the benefit of humans. They have no normal life. To watch this short clip click here. 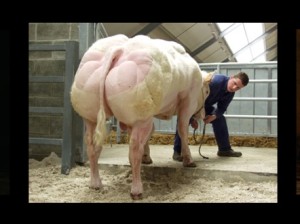 It really has me thinking over the God-complex that we have as a species. And as usual, if it is for the benefit of the dollar, ethics seems to have been thrown out the window. How fair is it for us to be doing what we are doing to the plants and animals of this world? Let’s hope that Australia continues to have a freedom of choice around where and what we buy or grow to nourish our families.

Wow, this is really scary stuff! Thanks for all the links, I’ve been watching them and learning a lot of frightening things, some of which I had no idea about!