Prevention Is Better Than Cure

A news report on the ABC on Tuesday morning, highlighted the fact that cancer has now become the number one cause of death around the world. The World Health Organisation published a report revealing that cancer has surpassed heart disease as the biggest killer in Australia in 2012. 40,000 Australians past away from cancer in 2012, with a total of 8.2 million people globally. Lung, liver, stomach, colorectal and breast cancers cause most deaths. Doctors predict global cancer rates will increase by 75% over the next two decades. 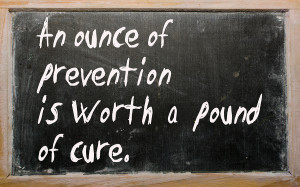 The report highlighted that lifestyle has been as a major causative factor, with the population of countries such as Australia more likely to have a poor diet, inactive lifestyles and be smokers. 3.7 million cancer deaths could have been avoided by lifestyle changes, such as quitting smoking, reducing alcohol intake and maintaining a healthy weight. This should not be the case! For a developed country, we should not have a ‘poor diet’ and with all the wide open spaces, freedom, not to mention 24 hour gyms- we shouldn’t have an inactive lifestyle! I’m not even going to mention smoking.

We live in a polluted world, everything around us contains chemicals and toxins. From the air we breathe, the water we drink, to the food we eat, we are continuously bombarded with substances our bodies have to detoxify and eliminate. The absolute least we can do to support good health is to eat organic foods and drink the purest water possible. Regular time out to detoxify our body is another key to keeping the best health possible. We service our cars regularly, so why not our bodies?

Prevention really is the best cure, and you know what? It is cheaper and much more enjoyable than treating cancer.

It’s about time the media caught on.

But I guess the next thing will be pharmaceutical companies trying to patent and make money from all the preventative medicine.

Guess it’s already happening in America with those oxygen bars. It’s disgusting. Clean air should not be a profit making venture.