It’s never nice when someone gets harmed by medication – but allowing yourself to be injected with an un-proven, un-tested vaccine (which ironically they ALL are), is just asking for trouble.  This article doesn’t surprise me one bit, and there are going to be hundreds of cases like this or worse.  Hopefully people will start to wake up and realise that having a healthy body is the way to resist illness, not having artificial filth injected into them.

From the article: “Ms Silke said her reaction came on gradually. It began with a headache which became a migraine. About an hour later she had intense pain around her right eye and jaw and within two hours she could not swallow. 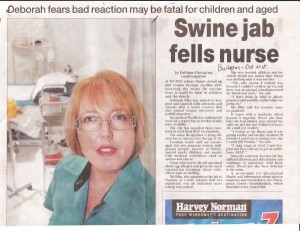 “I looked at my throat and it was getting smaller and smaller.  In about 20 minutes I could see it closing over, but I could still breathe.” she said.  “I rang triage at Gold Coast Hospital and they told me to get an ambulance ASAP.”

Since the event last Tuesday she has suffered dizziness and dehydration and continues to experience mild headaches. Blood has also been detected in her urine.