Are We a Nation of Pill-Poppers?

This article was from dailymail.co.uk, and was written about Britain’s pill-popping habits, but Australia isn’t far behind!

“Britain has become a nation of pill-poppers who turn to tablets to cure every ill, official figures show.

We each pick up more than 16 prescriptions a year on average, twice as many as 20 years ago, Department of Health data reveals.  This is despite people living longer and healthier lives than ever before.

With an ever-expanding range of over-the-counter painkillers also available, the true amount of pills taken could be far higher.  A profit-hungry pharmaceutical industry has been accused of inventing and exaggerating ailments and then blitzing doctors to boost sales.

Hyperactivity and high cholesterol are among the conditions that are said to have become increasingly medicalised. Prescriptions for diet drugs are also soaring, creating concerns that medicines with dangerous side-effects are being used as quick fixes to problems that could be solved through a healthier lifestyle. ”  You can find the balance of this article here:

Wow, 16 prescriptions a year on average – that is a huge amount of prescription drugs, and as they mention in the article, that’s not to take into account the over-the-counter drugs such as aspirin, other pain-killers, antacids, cough mixtures and medicines, laxatives and antihistamines, to name but a few medicines that most family’s carry in their bathroom cabinet.

I actually wrote a blog-post about this a while ago when a friend came over and asked for a Panadol, which I didn’t have: What’s In Your Medicine Cabinet?

It is very easy to get caught up in the quick-fix. That’s the down-side of natural medicine.  It quite often isn’t a quick-fix, but it certainly is a more permanent one, and one that normally comes without dangerous side-effects.  Even the most seemingly benign medicine can be harmful, and the statistics on “death by medicine” are too huge to ignore.  Although there may be dangers with natural medicine when used incorrectly, it would have to be quite an extreme situation for it to cause the type of harm that orthodox medicine causes daily. 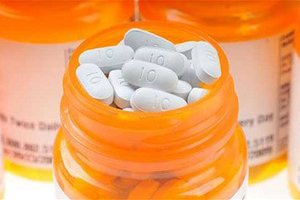 The other sad thing which is a by-product of all this prescription taking – is the death’s that are seemingly unrelated to medication, but quite likely are…

For example, a friend was recently telling me about a neighbour who had fallen off a ladder and sadly passed away.  The neighbour was elderly and maybe shouldn’t have been on the ladder in the first place, but as I understand it, part of the reason why he died from the fall was that he bled profusely from hitting his head and had bleeding in the brain from the trauma.  The gentleman was taking blood-thinning medication at the time.

Now, I don’t have a parallel universe to know what the outcome would have been, had the gentleman not been taking this medication – but what I do know is that it likely didn’t help the matter and seemed to be a contributory factor to his death, which would have been listed as an accidental death.  But then you could argue that had he not been on the medication he may have died of a heart attack years earlier if he didn’t choose to change his diet and lifestyle.  So there you go, nothing in health is that cut and dried, but my advice is to always try every avenue to heal naturally first.

Medication should never be the first choice except in emergencies.  Every family needs to have a good naturopath and a kit of natural remedies that they know how to use when required.  So often a headache can be fixed with some magnesium, a couple of glasses of water and a lie-down, but the knee-jerk reaction is to grab a drug.

Our body sends us messages through our symptoms and it is worth learning this language so that we can prevent serious illness long before it occurs.  And that way, we won’t have to of those unhealthy individuals picking up 16 prescriptions a year.

good article and i agree,i come from a family that abuses the system to get pain pills what amazes me the doctors gladly pass them out

Thanks Raymond,
Yes, it is appalling the way medicines are just handed out without looking for underlying causes of the symptoms. And unfortunately we have whole generations of people who think that this is normal! Pop a pill and the symptom goes away – you might feel better in the short term (if you don;t get an immediate bad side effect), but the long-term ramifications are horrific. I would advise always going natural first and stop ignoring and covering minor symptoms – they have something to tell you!
Leisa