Sitting in the hairdresser’s last week, I was reading the June issue of Madison Magazine and found an article on medical mistakes.  I wish I had asked to keep the article because I’ve tried to find a June copy from the local newsagents, but it is no longer available, and I wanted to quote some of it here.  Next time I go to the hairdresser I’ll grab it and add to this post!

The crux of the article was about the incidence of preventable medical mistakes in hospitals, and the havoc they cause.  From memory they listed a figure like 1 in 10 hospital patients are going to suffer from some kind of medication or treatment error during their stay.  It was a high figure and results in many, many unnecessary deaths.

One of the main stories within the article was about a 16 year old girl who had been at a school golf excursion and had been hit in the head by a golf ball, which fractured her skull.  In hospital she was given four times the acceptable dose of morphine, had a seizure which was ignored, and then went into respiratory distress and died.  The family didn’t think for a minute that an injury which should have been easily treated, could result in death due to medical negligence – but it is not uncommon. 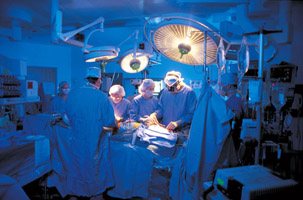 I have my own story on this theme, and even though my aim is to keep as healthy as possible to avoid ever needing to go to a hospital – accidents can be the exception.

In 1999 I was at Tae-Kwon-Do training and suffered an accident where I broke my femur (the huge bone in the thigh) and was taken to hospital in excruciating pain.  I was told that it was such a bad break I would need to have the bone pinned by a long rod from the hip to the knee placed in the centre of the femur, and secured with screws at the knee and hip.  Even under the influence of morphine, I was lucid enough to demand a second opinion, which the hospital provided along with a greater explanation of the seriousness of the break.

They couldn’t operate until the next day, so I spent the night in immense pain, and even the movement of taking a breath meant I could feel the bones move in my leg – it was a nauseating feeling.  The next morning I had a nurse and two wardsmen come into the room to give me a bath.  The wardsmen were going to roll me on one side, and the nurse was going to bathe me.

Except, I had a loose, broken femur in my leg and didn’t think I should be moved at all.  In my drugged out state I slurred that I shouldn’t be moved, my bone wasn’t set and I thought it was dangerous.  They insisted I have a bath and moved to start the process.  Even though I was hardly conscious, I knew I shouldn’t be moved.  No-one was with me in those early hours of the morning (outside visiting hours) to back me up, and I was arguing with three people who were insisting I needed to be rolled on my side.  So in  the end when arguing wasn’t working, I did the only thing I could think of.

I screamed at the top of my lungs until they left.

Then I was moved to another ward for being a troublesome patient – but at least they left me alone then.

The next day, after my surgery, the head nurse came in and looked at my chart. “My you’re a lucky girl aren’t you?  That bone was only millimetres away from severing your artery, and if that had have happened you may have lost your leg or even died!”.  Thanks for that.  But what would have happened if I had have let the nurses and wardsmen roll me?  The risk was great that the artery could have been cut, and the consequences of that would have been dire.

There may be times when yourself or someone you love needs to be in hospital, and even though much great work is done saving lives in traumatic situations, it pays to have someone with you to be absolutely vigilant about every little detail of your treatment and recovery.  I wish I had have realised I needed someone with me that night to be my advocate and stand up to the nurses, because being heavily medicated, I wasn’t in any state to be standing up for myself with conviction.

Often we have a belief that doctors know best – but with the unacceptably high rate of mistakes, the long hours medical staff need to work, the factors of tiredness and understaffing – we need to be able to ask questions and be alert to the needs and health of the patient at all times.  Better troublesome and annoying, than dead.

So my advice is to keep as healthy as you can to prevent the need to go into hospital, and if you do have to, question, question, question.  Don’t take it for granted that everything is being taken of, get second opinions, and don’t leave your loved one’s side.  Oh, and if they have to be in there for very long, bring them fresh organic food and juices!

All in all, it was great to see this article in the mainstream media, as more often than not, mistakes are swept under the carpet, and the general public has no idea of the dangers they face in hospital.

Next post: Raw Foods to Avoid in Autoimmunity & Inflammation