When David Wolfe toured Australia earlier this year, he spoke about the importance of being grounded, or connected to the earth.  He spoke about how this one simple practice, can reduce inflammation, eliminate pain, and improve sleep.  You can listen to David speaking about grounding in the video below:

From the Barefoot company website: “In 1998, a retired cable TV executive was sitting on a park bench in Sedona, Arizona, watching the passing parade of tourists and became aware that almost everybody wore shoes with synthetic soles. He wondered if such footwear, which had increasingly replaced leather since the 1960s, could have an effect on our bodies.

Clint Ober was his name and it occurred to him rather innocently that he and most everyone else around him wearing such shoes were insulated from the natural electrical surface charge of the Earth known in the electrical world simply as “ground.” All electrical systems in our homes, businesses, and industries are stabilized and protected by the Earth’s “ground.”

Ober wondered if the lack of Earth’s ground energy could affect the body?  This one simple question inspired years of experiments and multiple scientific studies involving biophysicists, medical doctors, electrophysiologists, and exercise physiologists. The studies produced fascinating evidence demonstrating that connecting and grounding the body to the Earth has a positive influence. 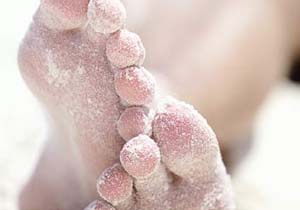 Throughout the years of research and experimentation, Ober developed and refined indoor Earthing systems for use in studies and to fill a growing demand by individuals who heard about the “feel better” effects of Earthing. The products displayed here are the result of his effort to make available to people in a practical way methods to ground their body with the natural and subtle surface energy of the Earth as they sleep, work, and relax indoors. To date, thousands of individuals-men, women, children, and professional athletes alike have incorporated grounding into their daily lives.

Throughout the history of civilization, cultures around the world honored connectedness to the Earth and described the energy of the Earth in different ways. Modern lifestyle has increasingly disconnected us from this energy. Research is now explaining, in scientific terms, the importance of this energy to naturally reduce and prevent electrical stress in the body.

The mission of Barefoot Sales Corp. is to continue to develop and provide products that help people everywhere conveniently incorporate personal grounding into their daily lives.”

I will be placing a bulk order for selected grounding products on the 12th of September - two weeks from now – so if you would like a Bed Pad, Recovery Bag or Mat, please go to the order page here.  Delivery will be approximately two- three weeks following the 12th Sept.

Hello Leisa, I am interested in the earthing pads available in the US. Do you know an Australian supplier wisth pads compatible to our voltage.
Thanks,
Cath

Hi Cath,
Linda at http://www.barefoothealing.com.au sells the products in Aus and has an adaptor.
Leis