Colonic Irrigation made it into the mainstream media this week – but as usual the article was incredibly one-sided and slammed colonics as being dangerous.  It trotted out some old myths and used misinformation to attempt to show that colonics have no benefit whatsoever, and could in fact, harm people’s health. 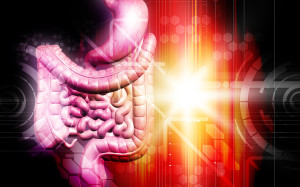 The Daily Mail writes: “In fact, most studies have revealed it could do more harm than good. There are fears it can flush out ‘friendly’ bacteria needed for a healthy immune system and damage internal body parts if not performed well. Dr Jonathan Booth, consultant gastroenterologist at Spire Dunedin Hospital in Reading previously told the Daily Mail: ‘There are several major risks to colonic irrigation, the first being perforation of the bowel wall, infection from the water or unsterilised equipment and disturbance of the balance of minerals in the blood.”

Time and time again we hear from doctors who know very little about natural medicine and colonic therapy in particular, spouting their uneducated views about the “dangers” of colonics. The perforated bowel issue is mostly urban legend – there was a case decades ago of one clinic who did perforate a bowel with a metal speculum – but the speculums used today are soft plastic and cannot harm the thick layer of musculature that is the bowel wall. Colonic equipment is sterilised and the water is also filtered and sterilised, there is more chance of developing an infection in hospital than there is from a colonic clinic! Colonics are a very professional and clean service and it is a shame that these myths keep being perpetuated. We clear up a lot of these negative beliefs in the video below, where I filmed myself having a colonic

It is safe to watch!

For those who would like even more information where we well and truly put these myths to rest, I interviewed Sally Hawkins, a renowned colonics therapist, where we discussed these issues and much, much more, on the CD titled “Healthy Inside & Out – Everything You Wanted To Know About Colonics But Were Afraid To Ask”. You can purchase that CD for just $25 at the Embracing Health Store. 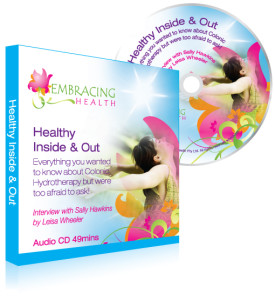 There are numerous health benefits to colonics, but they do need to be administered by a practitioner who understands the bowel very well – in Australia colonics practitioners are well trained and registered, and are well informed as to the type of conditions which are not suited to colonic therapy, such as colon surgery, preganancy and various inflammatory diseases. Don’t let the scare tactics fool you! Colonics have a very important part to play in creating long term, quality health.

Thanks for sharing! Nice for the questions to be answered so openly.

Lovely timing for me to as I really feel this is the next step for me on my health and emotional healing path; however a friend suggested I try the “Pulse” fast and cleanse by Don Tolman for a softer and less invasive approach… what are your thoughts here? Would the Pulse cleanse ‘clean’ more of your system than a Colonic? Which is most effective?

Thanks so much Leisa. Appreciate your time and wisdom.