(NaturalNews) Buckwheat`s name is deceiving. It is not a wheat, but a seed (ref: Raw Food World…), and has abundant qualities which make it an excellent food to add to one`s diet. It is easy to cook and normally available cheaply in health food stores. Even better is the fact that it is twice as easy to sprout as it is to cook, and with an even more appealing texture. Here are three reasons to include buckwheat in your diet.

Numerous health benefits are buckwheat`s prime claim to fame. Firstly, it does not contain gluten, so it makes an excellent substitute for other grains in the diet. Studies have indicated that consuming buckwheat may combat high blood pressure and high cholesterol. Also, buckwheat does not lead to peaks in blood sugar levels. One six year study done in Iowa showed that women who consume an average of three servings of buckwheat per day have a 26% lower risk of diabetes than women who don`t. (Ref: whfoods.com). Buckwheat contains the eight essential amino acids, as well as high proportions of manganese, magnesium and fiber. Finally, it also contains two flavanoids. Firstly, there`s quercitin, thought to support healing in the body. Secondly, there`s rutin which is an antioxidant, and therefore may inhibit cancer. Rutin also strengthens the capillaries and circulation, thereby reducing painful varicose veins. 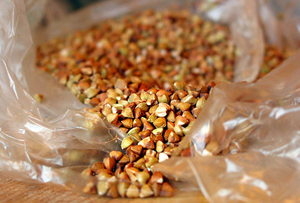 Buckwheat is very easy to sprout. Ensure that you purchase the seeds untoasted, and simply soak them in abundant water overnight. Toasted buckwheat will have a golden brown color, whereas raw buckwheat will be white or light green. Then rinse and drain them well. You`ll notice a slightly slimy film over the seeds after soaking, which is why it`s a good idea to rinse and drain them well. Then put them in a wide Tupperware box, without the lid, or in a sprouter, and leave them somewhere where the air can get at them. In two days the slimy film will have disappeared and you`ll be left with slightly crunchy little buckwheat sprouts.

Buckwheat is very versatile. As mentioned, you can eat it cooked and include it in salads. In it`s sprouted form it is even more versatile. The taste is not very strong, so you can happily include them in either sweet or savory dishes. Try adding them to a smoothie for extra texture and energy. Alternatively, blend the seeds with one apple or pear, put the mixture in a bowl with sprouted nut milk, and you have yourself a raw, enzyme-rich porridge. A quick and filling savory snack includes buckwheat, half an avocado, a dash of olive oil, and salt, which is surprisingly satisfying, and easy to prepare.

Hi Leisa, nice to stumble across your page and meet you again (I met you on RP). I love the fact that you are promoting buckwheat I think that buckwheat is a godsend for anyone having trouble balancing their blood sugar while eating raw. I have been periodically 100% raw, but keep stopping due to having issues with blood sugar. My next challenge is to kick the dried fruit habit that I aquired when I started eating raw, and eat much more buckwheat and other pseudograins like quinoa.

Hi Petra!
Great that you’re doing more of that lovely alkalsing buckwheat and quinoa – as you’ve seen they are good for stabilising blood sugars and giving nice amounts of fibre and protein. And yes, kicking the dried fruit habit is probably a good one! I know I had to break my coconut, cacao slice habit