I Lied To My Dying Daughter…

This was just a sad story all-round, and it is hard not to get frustrated and angry with a medical profession that keeps alternative cancer treatments illegal and needlessly let’s thousand upon thousands of people die before their time.

In this story, a 13 year old girl was diagnosed with malignant melanoma and had extensive operations to remove a lot of the flesh from the calf of her leg.  The doctors gave her the all-clear and she was told they had “got it all” and wouldn’t need chemo or radiation.  Four years later however, the cancer was back – her body was riddled with tumours, and she passed away soon after.

The saddest part of this story is, in my opinion, that there were four years between the operation to remove the cancer, and when she was diagnosed again.  Four years where there could have been any number of alternative methods employed to change the ecology of the body in which the cancer was created in the first place.  Four years to research what could be the best type of preventative and curative protocol. 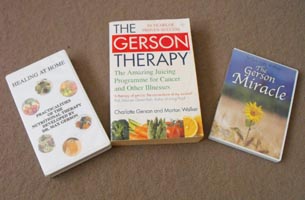 Gerson Therapy on it’s own has amazing results with malignant melanoma, and that to me would have been enough incentive to start the girl on Gerson Therapy even if they did think they “got it all” in the operation.  Personally I would have started Gerson treatment and NOT has the operation, but that is just me..

I find it very cruel that these poor people who are caught in the medical system, are not advised that there are well-researched methods into the reversal and prevention of cancer using food, herbs and supplements – and they can be very, very effective, non-harmful and non-invasive.  Yet, people are kept in the dark and told there is nothing more they can do.

It is criminal and it is inhumane.

It is my greatest wish that one day the tide will turn and people will realise the enormous injustices that the cancer industry has perpetrated on the population in the interests of power and greed – and then they will be defeated.   And natural medicine will have it’s rightful place as the first choice of health care, no matter what the disease…

great article leisa, so many medical injustices happening all around the world because of a medical system built on lining the back pockets of the pharmaceutical industry. please google “cut poison burn” and download the movie, a documentary and a heart breaking story about a 4 year old boy in america whose parents were taken to court by their medical doctor for refusing the standard treatment of chemo and radiation for their child and wanting to seek alternative therapies.

Absolutely Amanda – a good book on a similar subject is called Sarah’s Last Wish by Eve Hillary and it is an Australia story, so very close to home – I highly recommend that you have a read…