I feel like I have been a bit bombarded this week with examples of situations in our society that I believe are ridiculous to the point of being insane. As a relatively normal human of average intelligence I find myself asking, “If I think these situations are bonkers, then doesn’t everyone else? And if that’s the case, why do we just keep going along with it???” Let me put it into context for you. My main causes for concern include the areas of money, healthcare, pollution and waste. 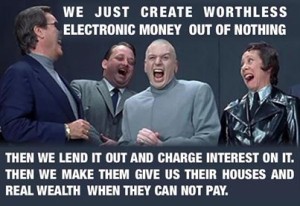 Money
I posted a meme on Facebook this morning that showed Dr Evil and his evil henchmen (and woman) laughing their heads off to the words “We just create worthless electronic money out of nothing, then we lend it out and charge interest on it. Then we make them give us their houses and real wealth when they cannot pay.” Simplified to the max, I know, but really, money is made by the Bank, then printed and loaned out with interest. To pay all the created money back plus the interest earned (money not even created) is actually impossible. Let’s simplify it further. If the bank prints out $100.00 only- no other money exists in the world, just that $100.00, and then it is loaned out at a 1% interest rate, as soon as you take that $100.00 you actually need to return $101.00 to the bank. Where do you get the $1.00? Insanity. For more information on the economic system focused mainly on the US, have a look at the documentary Zeitgeist. For the full movie click here.

A very successful financial banker once told me for every person on the planet, there is 3 million dollars actually in circulation. So if you don’t have your three million dollars, someone else does. And when you think about all the people in third world and developing countries that will never ever make their 3 million dollars, you really start wondering who exactly has all this money.

Healthcare
Or as I have come to think of it, illness-care. Our modern medicine has no interest in prevention. It wants you to be sick. That is where the money is. If you never have to take drugs or go to the hospital, then the big pharmaceutical companies are not earning anything from you. They need a sick society to stay in the money. Think of all the serious illness ads on TV asking for donations- they are not asking for money to research preventative measures, they want money to develop ‘cures’ or treatments.

I am constantly shocked by the amount of thyroid patients I see who have been to see their doctors feeling incredibly unwell, and they have been told there is nothing wrong with them, they’d better take some antidepressants. Many times our patients present with serious thyroid antibodies, yet because their actual thyroid hormone levels are not yet out of range, their doctor will say there is nothing wrong and send them home until their health gets so bad the thyroid hormone levels are affected. And then they can be medicated. For the rest of their lives. There is absolutely no talk of addressing it in its early stages and preventing further development. Insanity.

Pollution and Waste
Another Facebook meme took my eye yesterday. It was a quote by Mark Boyle saying “If we grew our own food, we wouldn’t waste a third of it as we do today. If we made our own tables and chairs, we wouldn’t throw them out the moment we changed the interior décor. If we had to clean our own drinking water, we probably wouldn’t sh*t in it.” Blunt, but incredibly true. We have such a disposable society. Because our waste is neatly taken care for us once a week we don’t give a thought to where our trash ends up. We don’t have an infinite amount of space on this planet, we don’t have an unlimited supply of fresh air, clean water, trees, wildlife, and so on. What are we doing?

Another quote that highlighted this point well, went something like “If tree’s gave off WiFi, we’d plant them everywhere. It’s a shame all they produce is oxygen.” Again, what are we doing? 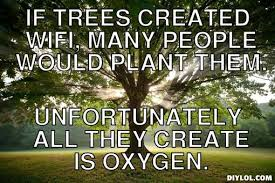 If you look close enough, it is easy to be brought down by the craziness of it all, and easier to throw your hands up in the air and think, “What can I do?” But I think for me, it is all about the small things. And if I change a little bit then the problems won’t be quite so bad. Let’s hope that others are changing with me.

Bravo! The world has gone mad, and it sometimes makes me want to scream at people! What are they thinking?

It can get overwhelming, so same as you, I just try and do my bit and educate people along the way where I can. Hoping things will change soon because this is crazy!

The worst thing for me is the healthcare system. I have family who think that doctors know everything and are on a lot of medication. I keep telling them that they can cure their diseases with food and exercise but they never listen. They are so indoctrinated into the system that they believe every word the doctor says, and even though I am fit and healthy and they are sick, I am the one who doesn’t know what they are talking about! Medicine is killing a lot of people, but not many question that, and if you do, then you are weird.

Yes Jessie, I think that’s all we can do without letting it get overwhelming. Small changes can make a difference. There is an African saying that springs to mind “If you think you are too small to make a difference, try spending the night with a mosquito!”. Lol!

I totally understand your frustration Stephen. It is really hard to watch people you love suffer when you believe you know a better, healthier way, but when it comes to health, you really have to just let people make their own decisions. All you can do is keep being that awesome healthy example, and people might just start thinking you know a thing or two.