The “New Boom” – Cattle As A Commodity

From Sixty Minutes: “There’s a new boom sweeping across Australia and it’s attracting the shrewdest brains and fattest wallets in the land. It’s beef – it has been branded the new iron ore, and it’s big business. Where mining was the only show in town, now, the cattle industry is riding high. After years of drought, dwindling prices, and the live export controversy, properties you couldn’t give away are today worth hundreds of millions of dollars. The smart money is snapping them up – Andrew ‘Twiggy’ Forrest, Gina Rinehart, and the most unlikely cattle baron of them all.” 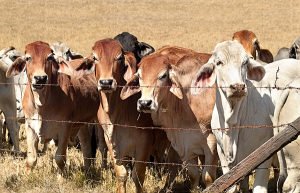 I watched this story on Sixty Minutes last night with growing sadness and frustration at the total disconnect that so many people feel from the animal world – a disconnect that enables them to see animals as nothing more than merchandise – an expendable commodity open to exploitation to the tune of millions of dollars. It is a depressing representation of greed over humanity.

Charles Wooley: “We haven’t even seen a cow yet, but already Harold Mitchell as sold me on the future of beef.”

Harold Mitchell: “Food is going to be bigger than any of the initial resources we’ve got.”

Charles Wooley: “Will it be bigger than coal. Is it a better bet than coal?”

Harold Mitchell: “Absolutely. Food, food is what the world is going to need, bigger than any of the resources over a long, long period of time.”

Resources. Commodities. Comparing living animals to coal. Nice way to encourage the desensitisation in people’s minds of the realities and horrors of the cattle industry, and especially, the live export industry. In today’s world, money and power are everything, and the cost to the environment and the animals we share this world with is spiraling out of control. Eating more meat is not the answer to feeding the world – this has been proven beyond doubt – but when millions of dollars are on the table, humanity goes out the window. At what point are we going to realise that we cannot continue to destroy the very environment that sustains us and continue to survive?

As I write in my upcoming book The ‘F’ Word Solution: “Growing animals for food is a wasteful exercise. It is not just the fact that sustaining animals requires large amounts of food, water, and fossil fuels that could be put to better use, but farming animals for food is an inefficient and uneconomical way of obtaining calories. It is estimated that 70% of all grain grown in the USA is fed to animals, with sixteen pounds of grain needed to produce just one pound of meat. It doesn’t seem logical to continue to promote a meat-based lifestyle when a plant-based one would see both environmental destruction and world hunger drastically reduced.”

Animals are not a commodity that can be compared to coal. While we continue to support a mind-set that places more importance on the almighty dollar than genuine answers to feeding the world, ending the suffering of sentient beings, and preserving the environment, unfortunately nothing is going to change. The cattle in this story are headed as live export to Indonesia, China and India – all of which have appalling records of animal abuse. Purported as creating “food security for Asia” this industry is where “the clever cash” is headed. But it’s not “clever cash.” It’s blood money. Money made from the short-sighted actions of people who are not interested in anything to do with the creation of sustainable food systems that are local, environmentally supportive, abundant, plant-based permaculture solutions. That is where the future of food really is, but it doesn’t make millions of dollars. Eating a mainly plant-based diet is the only ethical, moral, healthy and humane answer to the unfolding travesties that we have in the world today. Anything else is only a temporary “fix” along the path to destruction.

If you would like to support Animals Australia in their efforts to free animals from the horrors of live export, you can donate here:

I saw this program too and I was blown away by the greed of these people and how they totally overlooked that they were talking about living ANIMALS, not coal or iron ore. Dumbfounded.

They even were admiring a magnificent bull and calling him “Prime Minister” because of how proud he was and I wanted to just scream at them. How proud is this animal going to be packed into crates with hundreds of other thirsty, starving, injured animals while they travel in inhumane conditions to another country, where they will be abused, hurt, and distressed before being horrifically slaughtered under often barbaric conditions. Just to feed the world cheap meat.

These people need a serious wake-up call. Sometimes it money is just not worth it. Blood money indeed…