This was an interesting report: – “Feed the man meat, but don’t overdo it or he could go blind – that’s the finding of a study carried out by the Victorian Eye and Ear Hospital.

Researchers from the hospital and the Centre for Eye Research Australia have found a link between red meat consumption and an increased risk of early vision loss.

The report’s author Dr Elaine Chong said there was an association between people who ate red meat more than 10 times a week and early Age Related Macular Degeneration (AMD).

She said it’s the first detailed study in the world to look at the link between meat consumption and early Age Related Macular Degeneration (AMD). 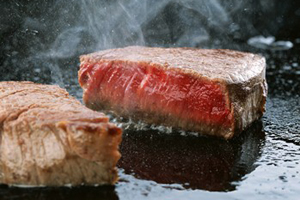 The study, which spanned two decades, examined the diets of 6,734 people aged between 58 and 69 in Melbourne between 1990-1994 and followed up with examination of their macular degeneration between 2003-2006.

It also found a decreased association of vision loss for people who ate more than three and a half serves of chicken a week.

“Interestingly, about one quarter of our study population ate red meat at least 10 times a week, and the association with both early and late AMD was stronger for salami and continental sausage consumption than for fresh red meat,” Dr Chong said.

AMD is the leading cause of severe vision loss in Australia and it’s estimated one in seven people over the age of 50 are affected by the condition.”

Again and again it keeps coming up – a high plant based diet is one of the healthiest that we can eat.  I am not a promoter of turning everyone into being completely vegan (see my Blog Post: But Do I Have to Give Up Meat?) but I do talk about lowering meat consumption to 10% or less of the diet.

Meat production, besides the inhumane conditions that animals are subjected to, is a huge contributing factor to the destruction of the environment and the excess consumption of animal products plays a major role in the development of chronic disease.  This article above is quite clear in linking meat consumption and AMD.

Funnily enough, just a few days ago I posted a blog about Kale, and mentioned in that post that consuming Kale regularly is a preventative for exactly this condition!!

Hhhmmmm – me thinks there is something to a mainly plant based lifestyle!

hey Leisa, unless you buy organic, 100% grass fed meat you are ingesting large numbers of toxins; pesticides, herbicides, fungicides, growth hormones, antibiotics, other medicines, and residues from the GM grain they feed the animals. We do not know all of the types of meat the people in this study were eating; although it does mention salami and continental sausage which we know are laden with cancer causing nitrites. So to say that there is a link between ‘meat’ and macular degeneration is completely unscientific – all that this study really reveals is that there is a link between the diets that these people were eating, which included certain types of meat, and MD, which I am not at all surprised about, but let’s not tar all meat with the same brush. You also have to question what else these people were eating, if they were poisoning themselves with chemically enhanced ‘meat’. How do we know that every single one of these people weren’t also consuming HFCS? That’s the trouble with these studies, they are just so unscientific that any real scientist just laughs at them – they prove nothing! If you want to 100% determine that a certain action causes only one specific reaction then you have to only change ONE variable, the one you are testing, and until you can do that you can NEVER say that one thing causes another. I would put money on there being NO truly scientific link between 100% grass fed organic meat and MD.

Dear Lynn,
You are probably quite right about the study not taking into account all the variables that come into play when trying to assess the role diet plays in disease. My point wasn’t to analyse this study in depth – I have written before about this subject “The Double Blind Debacle” in this blog, and find that most studies that try to assess foods are flawed. The point I was making was that high meat consumption (in this study they pointed out that the participants ate 10+ serves of meat per week which is a very high amount) is not a healthy thing to do. Yes, grass fed organic, antibiotic and hormone free meat is going to be a healthier choice, but I still wouldn’t advise eating 10+ serves a week of it.
Leisa

Previous post: New Sugar Less Bad For You – What?@*!